About That New York Times Twit

I know.  Some of you are saying "New York Times Twit"?  "Which one?  You gotta help us out a bit more"

I'm referring to one of the other outrages this week, the racist Asian woman with a history of all sorts of anti-white tweets dating back years.  I don't recall her name and wouldn't link to her anyway ('There's no such thing as bad publicity').

Longer version: Is she a racist bitch?  Yes.  Is she serious?  Hard to know; in her circles this might just be virtue signalling; showing she hates whitey more than most people.  Her most likely readership, Progtards, believe only whites can be racist, and whites are the only group that can be discriminated against and openly hated, so they'd think nothing's wrong with what she said.  Was the Times stupid to hire her?  Hello?  This is the NY Times, of course they're stupid.  They ceased being a real news organization long ago.  Should she be fired for it?  Nope.

Why not?  I think it would be extremely two-faced and dishonest to spend days talking about free speech with regard to CAM files for guns, and disallow free speech like this.  Especially after saying


"...we allow people to say what they want, even if we abhor it.  In fact, we allow it especially if we abhor it.  Offensive speech is the only kind that needs protection.  If we all agree with it, there's no controversy."

I like people to say what they really think.  If no one says what they think, it's hard to know who your real enemies are.   We know she's one.  If people keep their lips zipped in fear of losing their job, we don't get to know that.

I will continue my decades long tendency to never buy any NY Times publication, and you may not have noticed it, but I rarely even link to them.  Being aware of the likelihood of Gell-Mann amnesia, my default is to not trust the Times on any article even if it seems reasonable.   Unlike Gell-Mann amnesia victims, I remember all the things they've printed that weren't reasonable.  I believe my impact on the NY Times organization by doing my best to make sure not even a fraction of a cent goes to them is exactly the same as Bluto's grade point average: "zero point zero". 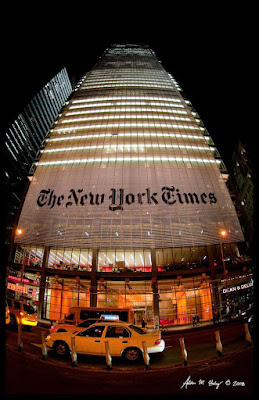 "All the News That Fits Our Narrative"