Blast From the Past

The last few weeks have brought some on and off work on something I haven't been doing in years.

I got interested in astronomy as a kid and had my first good telescope by junior high school (a 4" f10 reflector - good is a relative term).  In those days, we'd see stories about people who made their own telescopes complete from grinding a mirror through making a mount for it.  There was a Mars opposition at some time during my high school years, and I bought a kit to make a mirror.  I was going to do it!

Except without someone to guide you through the rough points, it's not necessarily easy.  In my case, I banged the mirror on my work stand (a 55 gallon drum, which my parents graciously allowed in my bedroom) and took a big chip out of it.  Instead of finishing the mirror and painting the chip flat black, the accepted wisdom of how to fix such things,  I tried to grind the chip out and, well, never did get that 8" mirror made.

Fast forward 20 years to about 1990, now an adult working for Major SE Defense Contractor, when I got the bug again.  This time, it was the information age and the internet offered this precursor to the web called Newsgroups.  Buoyed on by the folks on sci.astro.amateur, and with the help of a really great book, I made my first successful mirror and first good telescope.  For those who will understand this, it's a 6" f8 mirror; that is, 48" focal length, and a Newtonian Reflector.  It makes a good size, but like a lot of addictions, it leaves you wanting more.  (I rush to add that those newsgroups are still there today!)

I started a bigger mirror, 10" f6.  I missed the focal length; it came out f5.6 which is still perfectly usable.  This was a more difficult mirror, but a 10" mirror gives a serious advantage over the smaller mirror.  Area goes up as radius squared, so it has a little under 3 times the area as the 6" mirror.  I completed the 10", again with some help from people I met on the newsgroups.  I built the telescope as a Dobsonian, altitude-azimuth style mount.  This is actually the second iteration of the telescope, when I replaced the typical cardboard tube with a metal tube. 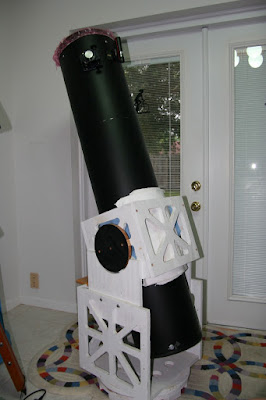 By extreme luck, I completed this telescope in early 1994, the year that Comet Shoemaker-Levy 9 crashed into Jupiter.  Nobody in all of human history had ever seen such a thing, and we saw the impact marks on Jupiter from our backyard through this telescope.  Armed with star charts and the old fashioned method of "star hopping" (going from landmark star to star in your finder scope until you find the object you're looking for), I spent several years exploring the sky with it.

The story goes a bit sideways here.  These telescopes have a lot going for them but they have a serious drawback: they don't track an object so that you constantly have to reposition the scope while looking at a planet or other object to compensate for the apparent motion in the eyepiece.  On higher powers, say 300x or more, the earth's rotation can cause a planet to drift cross the field of view in perhaps ten seconds.  (As a side note, this is half the speed of a clock's hour hand.  A star on the celestial equator goes from east to west in 12 hours.  That's the same as going from 3 to 9 on a clock - only the clock does it twice as fast)

It's now in the early 2000s, and my career had gotten to the point where I had "more money than time" and with that the funds to buy a commercial telescope with a computerized tracking mount and a new feature called "GoTo".  With a GoTo system, you typically tell a handheld controller what object you want to view and it moves the telescope until it puts that object in your field of view.  I literally saw more deep sky objects in my first night with that scope than I used to see in a season without the GoTo feature.

One night, we set up a test in the backyard.  We put the commercial telescope, an 11" compound reflector side by side with my 10" reflector.  We pushed the same magnification on both scopes.  Both Mrs. Graybeard and I thought the image in my telescope was better.

This led to a plan to go back to using mine and getting a mount for it that allowed tracking and GoTo.   Much to my surprise, I don't have any pictures of the telescope at that time.  I repainted it blue because the original paint job chipped maddeningly (I bought the tube pre-painted inside and out) .

This Christmas, I moved the telescope on the tripod out to the shop, as I've done every year, and one of the casters disintegrated - sort of a flat tire.  I had to put wheels on it.  I thought bigger casters would be better than the ones it had, so they got upgraded from 1-3/4" diameter to 4".  A little shop time was required to build mounting hardware for them.  Those are 4" casters simply because I had them.  They were for some project idea or other that got replaced. 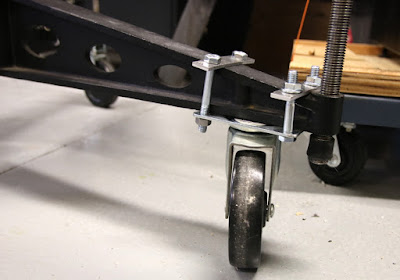 I had some generalized fixing that had to be done.  The mount was loose and I didn't recall how to tighten it.  I figured that out this week.  Finally, the telescope and mount could be reunited.  This isn't "done done" but is pretty close to it. 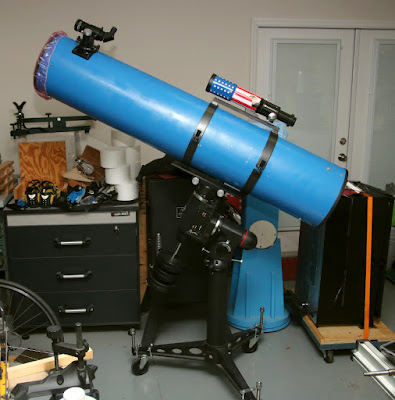 The big telescope tube is 12" diameter and 60" long, for scale.  Oh, for closure, look to the right of the black mount and you'll see and odd-shaped blue structure with a white disk on its side.  That's my 6" f8 reflector that I started the story with.  (The black box with the orange strap on a cart is my smoker.)  It's in a square, plywood tube, but it's a Dobsonian style mount, too.

I connected the controller computer to the mount and turned it on.  It acted like I'd turned it off the minute before.  Never missed a beat.  There's still a little bit of maintenance to do on things but it's usable.  The thing is, I haven't used it since the year was in single digits, like '08 or '09.  Our neighborhood trees (including my own) have grown up so much that it's difficult to see the sky, and what we can see is light polluted.  To use it now, the 4" casters won't cut it.  Those are fine for the porch, but to get it out to where it can see even a sliver of sky, I need 20 or 26" mountain bike tires on the mount.  Or garden cart wheels.  And that's another redesign and building project.