Resilience and the Total Cost of Coronavirus

In my mind, I've been beating the drum of more resilience in our systems for a while, but a quick check of the page with Windows Control-F only shows the word twice, in my article on toilet paper and chicken wings.  Maybe it's just in my mind and I haven't talked about it here so much as with other people or I'm just seeing the same problem of our systems being too specialized over and over again.

Just this weekend, I saw that dairy farmers were dumping milk for the same reason there's glut on restaurant chicken wings and a shortage of grocery store toilet paper.  The retail stores are short of milk and milk products but the restaurant and service sector is overflowing with the stuff and the system can't adjust fast enough.  Today I heard many livestock ranchers are in a double bind, too. Smithfield, the giant meat processor (bacon, ham, sausages...) closed its processing plant in Sioux Falls, South Dakota.

"That’s a huge, huge concern if we lose that capability," Muller said. "To not only our producers but to maintain that food supply."

Will all those 20,000 hogs per day go to waste?  Beef producers are also facing a pinch.  Feed is going up in price, prices for the cattle are going down and they're afraid of having cattle on hand and no place to sell it to.  The Midwest is in the midst of planting season and is worried they can't plant enough and won't be able to get enough help to harvest it.  It seems likely that food shortages are coming.

It seems to me that the economic damage being wrought here by the Kung Flu dramatically overshadows the health damages.  Don't get me wrong; it's clearly a tragedy that nearly 16,500 people in the country have died from the disease, I just wouldn't be surprised if 5 to 10 times more than that die as a result of our reaction to it.

At an "away game", a comment to Borepatch, I noted my (most likely rather unusual) way of looking at this.


The total annual death rate is around 7800 peeps/day (2018 data from CDC) - which includes the flu. Not all of those are in hospitals because some are fatalities or suicides cleaned up by first responders, but most are hospitalized. Suicides and injuries account for about 680 deaths per day, putting the total closer to 7100 On top of whatever number that is, we've added around 1200/day, about 17% increase. Is our system so fragile that we can't handle a 17% overload?

That said, it's not the same everywhere and some cities and hospitals are worse off than others. Some are getting more than 17% overload and some may have fewer deaths than [a typical] year.

Later on in the comments, Aesop from Raconteur Report answered my rhetorical question with, "hell yeah,"


You've leaned it out, like airlines, to the point that if it's not running at >90% most days, it goes broke.
There's no surge capacity, and they can't survive financially with 80% occupancy and 80% staff.
(Who do you know that's willing to sit around idle 20% of their working year?)
So it's high 90s, most days and times.
Thus little stretch if catastrophe strikes.

In my view, this is the result of planners applying "Just in Time" inventory management to hospital beds and equipment in the name of efficiency.  A fundamental in setting up a company is the trade-off between efficiency and responsiveness.  When you walk into the post office and waste your 20 minutes in line, it's because they're being efficient.  You wait on them.  When you need a doctor or the ambulance, just like the police or the ambulance service, you want responsiveness; you want them to be waiting on you.  Back right after Trump's election, I wrote a piece saying, "God Save Us from Efficient Medicine" where I went into more of this.

Yeah, I don't claim to know the optimum solution for balancing steady state demand vs. peak demand in hospitals or other parts of the medical world, I just know we need a better balance.  For all the years in industry I worked in a Just In Time inventory system, I called it, Just Missed It inventory.  The company, thankfully, realized it and over-ordered some supplies based on how often they were defective.  Extra capacity equals resilience.  I see a place for food distributors that would make agreements with both retail grocers and restaurant chains so that the food supply could be shifted a bit between the end markets if conditions necessitate.  I'm not sure, but I'd think that after a hurricane when parts of the state are on 3 weeks without power, that those areas experience an increase in restaurant demand compared to grocery stores. The same sort of business needs to be looked at in all these markets.

The problem as I see it is we're not tracking any of the impacts of shutting down the country and just tracking how well we protected the health care system from collapse due to an increased workload.  There are many reports going around about increases in calls to suicide hotlines and telephone counseling facilities as more and more people face depressing situations.  There are anecdotal reports of increased calls to domestic violence agencies.  The Substance Abuse and Mental Health Services Administration, reported an 891% increase in calls over last year.  Doctors are reporting fewer patients in Emergency Rooms for heart problems and other typical conditions they treat and doctors think patients are staying at home when they think they're having a heart attack instead of going to the Emergency Room.  This isn't good.


In New York City, the number of people dying at home has surged in recent weeks to about 200 a day, compared with about 22 to 32 deaths during the same time frame last year, according to the New York City Fire Department’s data on cardiac arrest calls.
...
Nearly 68% of cardiologists who responded to an informal Twitter poll posted this month by Angioplasty.org, an online community of cardiologists, said they have been seeing at least 40% fewer cases.

I know that when this topic comes up, the leftist wokescolds start to say, "you only care about money!  You don't value life!"  The answer is that the country is only looking at how many lives we're helping in one very specific place and totally ignoring the much, much larger group that's being impacted by these policies.  We can't put a price on it because it's impossible to know how many lives we've saved.

What if we're losing one life for every life we're saving?  What if it's more than that?  You might object, but how do you know without measured data?  Remember, they eliminated all elective surgeries.  My wife's cancer surgeries were considered elective, would she be sitting with me if those were put off three or six months?  How many people will die because of that?  With apparently millions of businesses closing that's going to affect healthcare as well as all retail businesses.  How many people will die because of that?  What about the millions of workers who have no place to go back to? 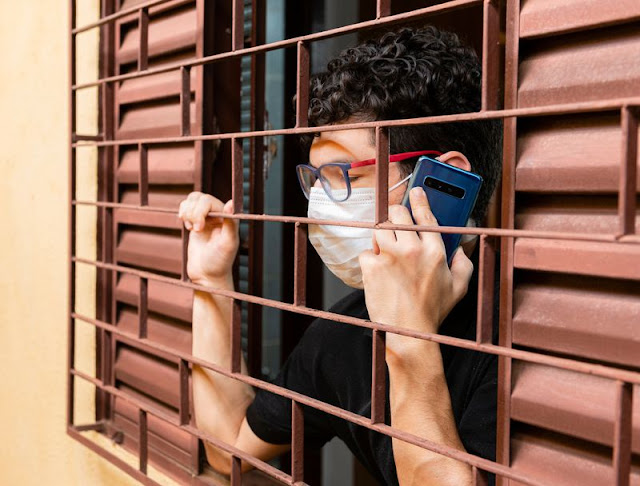 (ShutterStock, but used at the NY Daily News.)