Things Are Popping Over at Boca Chica

The culmination of three nights and more than 20 hours of concerted effort, SpaceX was finally able to fill Starship test tank SN7.1 with several hundred tons of liquid nitrogen before dawn on September 23rd. With just an hour left in the day’s test window, SpaceX closed the tank’s vents, allowing its cryogenic contents to boil into gas and expand with no outlet. At 4:57 am CDT, SN7.1 burst, bringing its lengthy test campaign to a decisive end.

This video should start about 2:10 into the timeline, and a few seconds before the pop.  There's no real reason to watch more than about 30 seconds, IMO.  As for the test, there's no word on whether it performed as desired, or was excessively strong (such that they could make the metal thinner and save some weight); I'll say being excessively weak is unlikely, thinking earlier tests would have blown the tank if it was too weak.  Ordinarily SpaceX doesn't release specifics; those are tweeted by Elon Musk.

Everything else out at Boca Chica is really hopping, though.

With the destructive test over, the totally new phase begins.  As commenter BillB and I wrote about on Monday, and as Teslarati writes about after this morning's test, it looks like Serial Number 8 will be wheeled to the test stand early tomorrow - or possibly a bit later if needed to finish configuring it for test.  A series of tests will ensue, and with reasonable progress, SN8 will hop to around 60,000 feet in the not too distant future.  I could see it making its big hop by mid-October.  Photographer Mary, Boca Chica Gal, took this photo of number 8 for NASASpaceflight.com today: 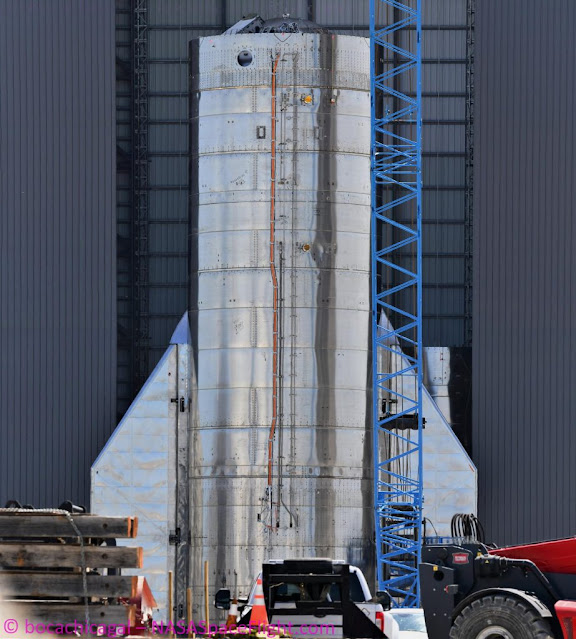 As you can see, SN8 already looks quite different from the flying grain solos we've already seen (SN5 and 6); but it doesn't have a nose cone.  The speculation is just when that gets added.

As of September 23rd, SN8’s twin aft flaps – large aerodynamic control surfaces meant to stabilize free-falling Starships – have been fully installed alongside ‘aerocovers’ that will protect each flap’s control mechanisms. The only hardware Starship SN8 is missing is a ~20m (~60 ft) tall nosecone, two smaller forward flaps, and the plumbing needed to access a smaller liquid oxygen “header” tank located in the tip of said nose.

At the moment, SpaceX has installed one Starship nosecone prototype atop five unpressurized rings – creating a full nosecone stack. That particular prototype has no liquid oxygen header tank, however, meaning that SpaceX would likely need at least a day or two to weld one of the noses with a header tank atop one of several finished five-ring sections. In other words, to transport SN8 to the pad tomorrow, there’s almost no chance that SpaceX will have time to finish and install a proper nosecone on the prototype, meaning that the company has chosen to test the Starship before that milestone.

It appears the answer is that they will test what they can without the nosecone.  This morning's successful pop of SN7.1 was followed by road closure notices for SN8’s transport to the launch pad around dawn tomorrow, September 24th, and another closure just labelled “SN8 Testing” set for September 27th, Sunday.

Another very interesting thing to note is that the first sections dedicated to a prototype Starship Heavy booster have begun their assembly in the shipyard.  The High Bay itself isn't quite fully assembled, but details like that don't seem to slow them down too long.  The first Super Heavy sections can be seen from around the 12minute 30 second mark through the end of this NASA Spaceflight video.  Valuable more for what they represent rather than how impressive they look.