A Literal Bolt Out of the Blue

While finishing dinner and watching the news, there was a nearby lightning strike and we've apparently lost our TV and media HDMI switch.  Power didn't flicker, it just seemed like a close strike, so I'm guessing it was due to an induced field from the nearby strike.  The internet which comes over our cable system played through it and there's apparently no other damage.  The cable converter box/DVR is working: both HDMI and fiber optic sound outputs are fine with a substitute box.  I could go around the house and check everything else we own, but I'll wait for the storms to be completely Done done.

The rain today was a constant flow of small squalls off the Atlantic onto shore, an "easterly wave" that was originally supposed to be here tomorrow but got here early.  There was a lot of lightning, but nothing that unusual for here.  We aren't exactly in the lightning capital of America, but you can see those storms from here.  Because of that, we're relatively hardened: surge suppressors on virtually everything.  We're also on underground utilities, which helps, although one bit of damage about 20 years ago blew a telephone junction box off the back of the house and across the yard.  Although we haven't had any real damage in a while, you're never really safe from it. 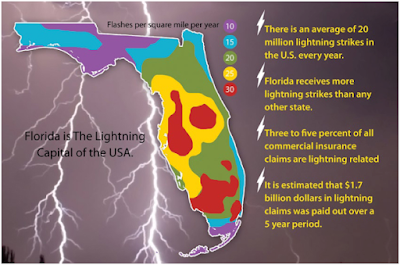 According to the National Weather Service, the number of annual thunderstorm days in the central Florida area are:
Looks like it's time to shop for a TV, and it will NOT be a smart TV.  Suggestions for a Dumb TV, around 50", would be appreciated.