Another 50 Years Ago Milestone

The handheld electronic calculator was coming to life 50 years ago this month.  The patent was filed for in September of 1967 by Texas Instruments, but not granted for another seven years!

It's a foreign concept for us today, with integrated circuits (IC) in everything around us, but in the mid-'60s, they were still new and looking for their place in life.  A while back, I told the story of another TI marketing idea: convincing Regency to produce the world's first transistor radio, the TR-1.  Jack Kilby, one of the co-inventors of the IC, was now a technical leader at TI and came up with the very first "killer app" for ICs. Specifically: a slide rule killer!


In late September of 1965, Kilby called a group of senior engineers, which included Jerry Merryman, into his office for a meeting to discuss a new project. The purpose of the project was to build a small personal-computing device to possibly replace the slide rule. Kilby told the group the device would need to have buttons, it should be battery-powered, and there should be a display mechanism for the answers. He pointed to a book on his desk and said it needed to be about that size (small enough to fit in your pocket). However, it was up to them to come up with a plan for how to do it.

According to Kilby, the idea had originally come from Patrick “Pat” Haggerty, TI’s President and Chief Executive Officer. On a business flight to New York, Haggerty told Kilby that he’d like the IC Dept. to take on the task. According to Jerry, Haggerty was a far-seeing individual trying to come up with new electronic devices that could be created using integrated circuits. Many of the ideas he pitched to Kilby would fall by the wayside; however, that wasn’t the case for the calculator.

Central to the plan was engineer Jerry Merryman, see his biography “Jerry Merryman: the man who killed the slide rule,” (pdf), at the Slide Rule Museum.  Jerry was a perfect example of the kind of guys who were rising to the top in those days.


His technical career began at age 11. At a time when most of us were learning to sit up straight at the dinner table, Jerry was hired to repair radios. Born and raised in Hearne, Texas, he had been an inveterate tinkerer from birth, he says, and played with a Gilbert chemistry set, dismantled perfectly good alarm clocks, and used No. 6 dry cells from the trashcan of the railroad’s telegraph office to power his youthful experiments.

At the age of 18, Jerry got his "First Class Phone" ticket from the FCC (First Class Radiotelephone Operator's License - the FCC stopped issuing them years ago) and became the station engineer for a local broadcast station.  Although Jerry had attended Texas A&M University from 1949 to 1952 and 1957 to 1959, he didn’t graduate. Instead what he had was a diverse commercial and academic background, which included several years of designing vacuum-tube and transistor digital circuits. In 1963, Jerry ended up at TI and quickly gravitated to designing integrated circuits of extraordinary performance for the day.  Jack Kilby chose Jerry Merryman to lead the project, code-named Cal-Tech.  Kilby later stated he thought Jerry was probably the only engineer at the time that could have pulled it off, while also handling the management of the project.


[After the meeting with Kilby]  For the next three days and nights, Jerry worked hard on the logic design. He started out on the first day late in the afternoon by drawing a flip-flop circuit on a board to denote an “Add” button. Then on several sheets of quadrille desk-pad paper, he drew out how to do the arithmetic, how to control the logic, and a rough design of the architecture. What he ended up with was not the complete logic, but it was an excellent starting point. According to Jerry, “It still required a lot more fiddling with.”

As work progressed, the team kept innovating new devices, more complex than ever before.  Truth be told, that was really the motivation behind the project: figure out how to integrate more and more transistors, and achieve higher levels of  integration.  TI wanted to branch out beyond military applications and put ICs in everyday consumer products to showcase their widespread capability. The calculator was a means of accomplishing that goal.


To build a calculator, they estimated they would need thousands of transistors with at least 83% yield. The probability that it would work was practically zero, so Jerry went to Kilby’s office to express his concerns. He said, "The yield of this thing is going to be 0. I'd like to build it in about 16 chips. Each chip will be more complicated than anything we've ever built. It will be a real challenge."

Kilby didn’t agree. He wanted the team to build everything on one big integrated circuit. He responded with a sentiment he was known for: “You'll just have to think of something.”

Their breadboard of the calculator fit on three conventional-size desks positioned together, each with a top surface measuring roughly 10 square feet (2x5).  The goal was to fit this into a shirt pocket. 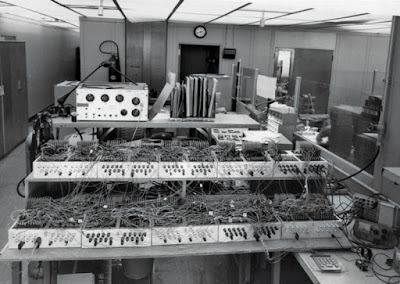 In 1966, the available transistors used too much power for the calculator. For an integrated circuit with thousands of transistors, Jerry imagined they would need something as powerful as a car battery, yet small enough to fit in your pocket. To solve this problem they needed to figure out a way to lower the overall required power. Jerry knew one way to do that was to go way down in voltage. He reasoned they could do everything with a small battery less than 5 V.

Even batteries that would be a logical choice weren't easily available in 1965.  Nickel-cadmium rechargeable batteries existed but the cells had too high internal resistance, too short a life, and didn't recharge very well.  After consultations with Yardney Battery, Jerry switched the project to silver-zinc batteries; 3 1.5V batteries in series to give 4.5V.  Yardney still produces silver-zinc batteries.

TI is known for their calculator products today, and you'd think this would be their first.  It was eventually released, but the project started in 1965 and it didn't become a product until 1972.  The Datamath 2500 was TI's first calculator product, but the story has a twist.  Before that, TI was a supplier of the ICs for Japan's Canon, whose Pocketronic calculator of 1970/71 was an advanced version of the Caltech project design and one of the first hand-held calculators.  Jerry's original "Project Caltech" calculator came on the market as Canon's product! 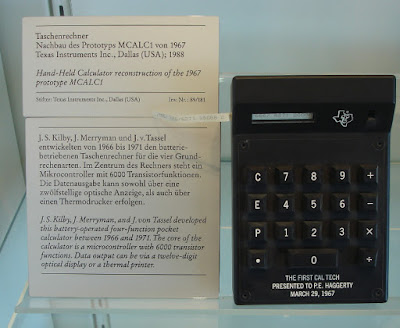 The first Cal Tech prototype calculator, from the Datamath Museum.

There's likely to be a few "my first calculator" stories here, so let me start it out with mine.  My first calculator was a simple four function calculator that always displayed two fixed decimal places.  I just remembered the brand of: Rapidman,  After a few Bing searches the closest looking thing I can find is a Rapidman 800.  This was somewhere in my first iteration of college ('73?), and I combined it with a slide rule - in those days most science classrooms had a 6 or 8 foot long slide rule hanging from hooks above the blackboards.  My first scientific calculator was a TI-SR-50.  It's still around here somewhere.