Both literally and figuratively.

Leading up to the holiday, I asked Mrs. Graybeard several times what she wanted to do for dinner, assuming it would involve the smoker.  It took her until the weekend to answer, "one of everything".  There's not enough room for "everything", so it turned into two large racks of spare ribs, some beef short ribs, and a package of chicken leg and thigh quarters.  I think this is the biggest load I've ever had in my little Masterbuilt smoker. 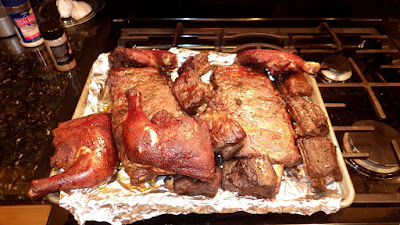 From my standpoint, as the guy doing the cooking running the smoker, that's easy, because instead of getting up every two hours overnight with a brisket like I've done, or just getting up early and starting about 4AM like I've also done, I can start late morning and have dinner ready "on time".  I do both types of ribs with the 3-2-1 method, which is fine but can make them turn out too ... mushy; too much like they've been in a stew.  Yesterday, I made the simple change of not adding liquid to the foil-wrapped ribs and they came out with more "chew" to them.  Fall off the bone is fine, and pulling out a bone while leaving the meat is desirable, but most competition judges like a bit more resistance to the "bite", as they say.  It also helped keep the bark or crust the right texture.  The chicken just went on the top shelf of the smoker with plenty of dry rub on them and sat the full 6 or 6-1/2 hours.

We'll have leftovers tonight, and then probably freeze everything else.

In the figurative leftovers, last time I talked about the shop I mentioned having issues with my "test plate" used to zero the mill.  I was unable to get the Z axis zero to behave properly.

The software is supposed to lower the spindle slowly until it senses the contact, withdraw the spindle .050" and then lower it again at a much slower speed, find the plate, figure out the coordinates and finally move the spindle to a "clearance plane" we define.  My fixture is 1.075 thick, so I need to set the clearance plane above that.  If I set the clearance plane to 1.500, Mach3 should say 1.500 when it's finished and the end of the tool should be 0.425 above the plate (1.500 - 1.075).  Instead, it would touch the plate, retract about 1 inch, lower the spindle about 0.2 "looking for" the plate, decide it was done, put the tool way above the plate and call it 1.500".  In actuality, it was about 3.375.  I wrestled with this for several hours, reading the software and still couldn't make sense of it.  Finally, something told me to do the universal software fix: quit the program and start it again.  I had been changing some settings in Mach3 over and over and maybe I'd messed it up?  After "turn it off and back on" the zero routine worked repeatably.  Yesterday, after the system was off overnight, I re-ran the routine and it screwed up again, stopping 3.375 above the base.  Quitting and starting over fixed it again.  I'm hoping this doesn't turn into something I need to do all the time.