In the various ways that the administration could make the balance of trade favor the US, and thereby bring more jobs back to the US, the most subtle would be to trash the dollar and drive it down compared to other currencies.

You and I might not ordinarily think of that, but it's really pretty simple.  The balance of trade running at a deficit simply means we're importing more than we're exporting. This causes dollars to flow overseas to buy those goods.  The stronger other currencies are compared to a trashed or devalued dollar, the cheaper our exports become due to the exchange rate.  It also makes imports more expensive in dollar terms.  That would both promote increased exports and make US consumers more likely to pick an American product.  If there's an American alternative at a premium price, that price difference goes down as the dollar gets weaker.  This would encourage a more positive balance of trade without doing things like imposing tariffs that are more overt (and might be harder to get through a congress that can't agree on which direction the sun rises).

Have you seen what has happened to the dollar since the Inaugural "Trump Bump"? 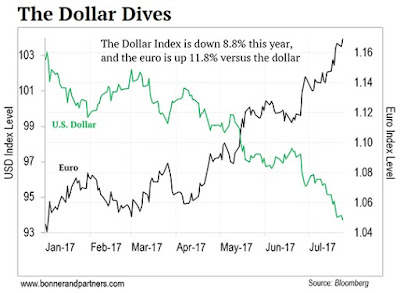 The dollar index (measured against a basket of other currencies) is down 8.8 % since the start of '17.  The Euro, in particular, is up 11.8% against the dollar.  That makes an imported European car that much more expensive.

Is it deliberate?  Has Trump's posturing had this effect?  Hard to tell.

It's a cliche' that no country ever devalued its way to greatness.  Devaluing or manipulating currency is no way to run a country.  As a temporary expedient, though, can it make any less sense than negative interest rates?  In Switzerland today, banks charge you 0.75% interest to save your money.  Did you know you could borrow the money to buy a house in Switzerland and pay almost the same amount as interest on your mortgage?   Bill Bonner puts it this way:

One has a million Swiss francs (roughly equal to $1 million). Another has nothing. One puts his million in a local bank. He pays 10,000 francs a year in negative interest.

What does he get? A monthly statement!

The other fellow borrows the same million dollars. He pays 10,000 francs a year in interest.

What does he get? A house!

In what universe does this make sense? There is so much wrong with this statement that... I... can't... even...

Paul Simon once wrote, "These are the days of miracle and wonder".  Judged by just about any valuation metric – their CAPE ratio, their price-to-earnings ratio, their price-to-book ratio, their dividend yield – US stocks are now the most expensive in the world.  Yesterday, the Dow was up another 100, today up 85 - to Yet Another All Time High.  The Volatility Index (measures fear) set an all time record low.  There's absolutely nothing to fear at all!  Is the other word for total lack of fear: complacency?

Overpriced?  At the bottom of the last bear market, an "average wage earner" could buy the entire S&P 500 for 20 hours wages.  Today it takes 110 hours.  I've reported several times that wages have been stagnant for the middle class for almost 50 years.  Those at the top, who can benefit from the Fed's manipulations, have seen their income go up over five fold.

Are you exposed to the stock market?  If this weren't an age of miracle and wonder, you certainly shouldn't be getting in now.  You buy low and sell high.  Ordinarily, one wouldn't think this could go higher with US stocks the most expensive in the world, but with a Federal Reserve printing money by supertanker full, could it?  Yesterday, the Fed announced they were going to leave the interest rates where they are, and begin their "quantitative tightening" (just like it sounds, the opposite of quantitative easing) Real Soon Now.

Can this really go on?