Wave power has been around for quite a while, but I've never heard of large, wave-power equivalents of wind farms catching on.  The concept is usually simple enough, and no surprise here: anyone who has stood on a beach while large waves are breaking knows that there's a lot of power there.  In principle, we could design something that turns that water motion into mechanical motion and get useful work done by it.

A company called Atmocean Inc. in New Mexico, of all places, are developing a pump that uses wave power to send pressurized seawater onto shore, where it is desalinated without the use of any external energy.  They're working with Sandia National Laboratories to develop this, so that may be why they're working on ocean waves in a place where the waves are more academic or conceptual.

The concept is rather cool, though.  They deploy a 200-ft by 200-ft array of float-operated pumps, like this: 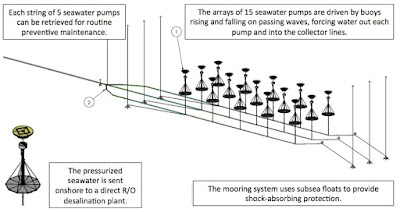 As the waves pass under the bouys, they rise.  A series of free-floating platforms called Variable Sea Anchors or “VSAs” are connected beneath the pump and provide drag to the rising buoys. The pumps located between the VSA and buoy are designed to take advantage of the resulting tension to pull in sea water and pump it towards shore. The entire array acts in series with five pumps along three separate strings to increase the volume and pressure of water being delivered on shore through a central pipe.


In southern Peru, where the company set up a prototype for testing, 50 million cubic feet of pressurized water would be pumped to shore in a year under typical ocean conditions. Fourteen percent of that is desalinated, producing 5 million cubic feet (37 million gallons) of fresh water annually that can be used for agriculture or consumption.

Estimates vary for how much water a person uses in a year, but 100 gallons per day is talked about as realistic, so that's conveniently close to a 37,000 gallons per year which divides into 37,000,000 easily.  That would be the usage of a town of 1000 Americans.  Do they use less in Peru?  No numbers available.  I'm pretty certain the amount required for agriculture depends on what they're growing.

One of the bouys in the experimental installation of Ilo, Peru. (Atmocean photo).

Where Sandia comes in is providing some high power computational resources.  They're helping the Atmocean engineers run computational fluid dynamics to optimize the pump designs.  The next step, once the pump design is refined and system improved, is a plan to deploy a system off Newfoundland.