No, Councilman Gossett; You're the Racist

Back during the 2012 presidential campaigns, a new insanity appeared on the left; the idea of "dog whistle" racism and dog whistle politics in general.  There's a ton of links I could give here, but chances are you remember, and I really don't want to link to any of the liberal sites to show examples.  The idea is that what you and I would consider innocuous phrases, like naming Chicago as politically corrupt, were really coded ways for evil conservatives to spread their racist hate.

I never met a person who had actually heard the messages that folks like Chris Matthews were telling us were there for us.  No conservatives I spoke with ever heard those messages.  If someone is trying to spread subtle messages, they're doing it wrong if the intended audience doesn't understand the message.

The relevance in this case is a little story out of liberal paradise Seattle, Washington.  In another bid to repulse tourists and get them to go spend their money elsewhere welcome all sorts of immigrants and homeless people, Seattle stopped enforcing laws about public defecation and urination.  In this aspect, they're like San Francisco and other urban, liberal paradises.  It has apparently gotten really ripe with human waste around the county courthouse.


The blocks surrounding the King County Superior Court are home to most of Seattle’s homeless shelters and social service buildings, and the sidewalks in the area emit a strong stench of urine and excrement, according to the Seattle Times. Employees at the courthouse say the area is also unsafe and that several jurors and half a dozen employees have been attacked outside the building.

Judges Laura Inveen and Jim Rogers asked the county on Tuesday for help with the area, requesting that the courthouse be cleaned with a daily power-wash to get rid of the human waste stench along with taking measures like removing bus stop benches in the area to decrease crime.

The Sheriff had noted how bad it had gotten.  The clerk of the courts had reported people coming for jury duty were scared off and apparently willing to consider being on the other side of a jury rather than face the stench in the area.

When the issue came to the County Commission to be acted on, Concilman Larry Gossett had the most puzzling response I've seen - and there isn't a day that goes by that I don't hear something that's totally, absolutely Nucking Futs.  He said it was a racist microaggression.

According to the Times, Councilmember Larry Gossett “said he didn’t like the idea of power-washing the sidewalks because it brought back images of the use of hoses against civil-rights activists.”

Thankfully, saner heads prevailed and the idea that poop had to be cleaned up was accepted.  The area has been pressure watched.  Meanwhile, anyone over the age of about two would recognize that if they saw poop on the floor somewhere, it needed to be cleaned up.  Even that two year old might hose it off the sidewalk outside.

Councilman Gossett, if you honestly think that cleaning streets is racist, you're the racist. If every time you see a hose being used to clean something, you think about "the use of hoses against civil-rights activists", you have a psychological problem.  This is in the category of unhealthy obsessions.  You should seek qualified help.  If you think only a certain race would defecate in the street, that also makes you the racist.  Either way, seek help. 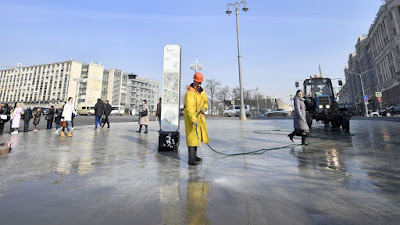 I'm not a shrink, and I don't know what words to use, but I think someone with that kind of response needs to find competent help.

Labels: bags-o'-scum, commies and other idiots