On July 11th, our Juno probe in orbit around Jupiter took another one of its closest approaches to the giant planet, the 7th perijove, this time buzzing the Great Red Spot at a height of 5600 miles.


Juno reached perijove (the point at which an orbit comes closest to Jupiter's center) on July 10 at 6:55 p.m. PDT (9:55 p.m. EDT). At the time of perijove, Juno was about 2,200 miles (3,500 kilometers) above the planet's cloud tops. Eleven minutes and 33 seconds later, Juno had covered another 24,713 miles (39,771 kilometers), and was passing directly above the coiling, crimson cloud tops of the Great Red Spot. The spacecraft passed about 5,600 miles (9,000 kilometers) above the clouds of this iconic feature. 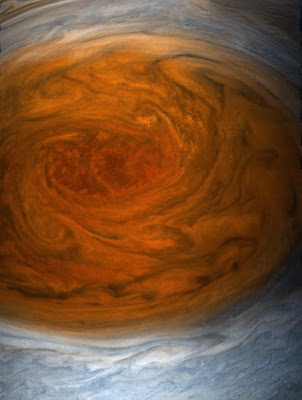 The data rate back to Earth is slow and the combination of that, and the amount of data make it take a while for the images to get here and be processed; this image was posted yesterday to the Astronomy Photo of the Day, processed by Sean Doran of the Planetary Society.

The Great Red Spot is the oldest continually-studied storm in the solar system, dating back to the first telescopes capable of resolving the disk of Jupiter with enough detail.  There are credible reports that it could be a feature observed by Italian astronomer Gian Domenico Cassini in 1665.  For observers today, it's easy to see in a small telescope, although its color tends to not be red, but varies from a pink to shades that appear more gray from Earth.  It's also getting smaller.

The picture is full of tremendous details, knots, swirls, twists, veinous-looking clouds and the appearance of storms within the the bigger storm.   It's not simply a Jovian hurricane; it's far more complex than that.