Have I Ever Said That Warren Buffet is a Stinkin' Hypocrite?

So what prompts the notice today, almost six years later?  Whenever I read about something he has done or said, it always turns out to be that he's either being self-serving, corrupt or just plain wrong, like this time.  There's this piece in Newsweek where Buffet says "Rich People Have Too Much Money".  Newsweek goes on to say Buffet is the second richest man on Earth.  Warren, if you're guilty about having too much money, you could start spreading your money voluntarily.  I understand he does some charitable giving.  So what's he up to?

Buffet complains about something I've also written about here, the stagnation of middle class wages since the early '70s (or before).  Specifically, if wages for working people have been stagnant that long and the uppermost incomes have expanded, you get this:

Newsweek chimes in with their own spin:

Neither Buffet nor Newsweek nor CNBC (the link about China) ever mention the central reason (pun intended) for the widening separations between the top and bottom earners: the central banks.  In the US, the Federal Reserve has deliberately and very actively worked to raise stock and housing prices.  In an honest stock market, a process called "price discovery" takes place: buyers and sellers determine the true price of assets.  That died in the 2008 recovery measures.  They may have believed they were helping and not hurting, but the results are the same: they've broken the information pathways in the economy.  (It's illegal, by the way, to manipulate securities prices, but nobody screamed as the Fed goosed up stock and bond prices, boosting total capitalization of both assets by as much as $20 trillion.  Well, nobody screamed except those of us who believe in real money and are opposed to Keynesian, centrally planned economies.)

In an honest market, the decision to invest your money is a big decision.  Stock buyers want to make sure the company is well managed and going to pay a return on investment.  As long as there's a firehouse-supply of money available, it becomes a momentum game.  Buying causes more buying.  Excitement causes more excitement.  Millisecond trading algorithms and "Flash Boys" trade on nothing else; they don't know or care if the company is going to be returning dividends in six months, they just care if the price is higher later.  When the bubble is expanding and money is free, it's easy to believe.  If someone had a little bit of money years ago and could take advantage of the low cost money to buy equities with, they made more.  If every bit of money went to groceries, things for the kids, keeping the lights on and all the other problems the rest of us face, well, we didn't make more in the markets.

This frenzied trading is part of the hypertrophy of finance I talked about last May; the situation created by the central banks in which the GDP of the US is traded every three days; $600 Million per second.  This is where the wealth transfer "from main street to Wall Street" (God, I hate that term) is taking place.  When you can show that since 2007 trade in physical goods and services increased 36 % while currency trading increased 160 %, it's easy to see which sector is making money.

The reason I hate the term "transfer of wealth from main street to Wall Street" is that it hides what's really going on.  It implies Wall Street is taking money from the people on Main street.  To begin with, Wall Street isn't benefiting from this at all, if "Wall Street" is used in the sense of the stock markets.  A handful of very big banks are benefiting from this, and it's all being carried out by the central banks at the behest of the governments.  If those banks are traded on Wall Street, their share price may go up because of this, but aside from brokerage fees, higher bank share prices are the only benefit Wall Street gets.  Calling those big banks "Banksters" - a cross between bankers and gangsters - also misses the point.  Everything they're doing is not only completely legal, it's completely pushed by the governments.  When the root cause of your problem is big government and central banks, blaming your problems on Wall Street, or "the rich", as Warren Buffet is doing, is only helping to perpetuate the problem and going to get innocent people hurt.

It's insane to be opposed to the problems caused by big government and ask for more government to fix them.  That's Bernie Sanders and virtually every name I hear on the left in one sentence.

End the Fed, go back to real money, and the "income inequality" problems will fix themselves. 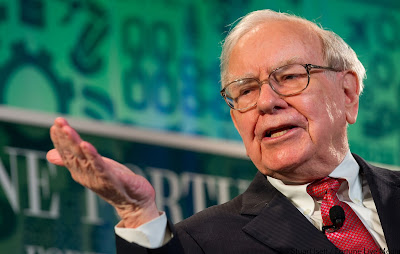