In Which I Answer a Commenter

Commenter tomfrompv to my post two days ago asked,


How about advice on preparation for the upcoming disaster? I think we all agree it's on the way. But what should the patriotic American do to get ready. I'm sure the globalists have already planned it out.

I'm not talking about "preppers". Most of us are either too old or think the "year zero" scenario has no chance of occurring. To me, it's more about how the individual can maintain his personal wealth, freedom, security, and well-being when the hammer finally hits.
...
What's the strategy for the ordinary guy?

Let me start out by saying that whatever I say here is probably being said by other people elsewhere.  I don't think I have any exclusive ideas in this arena, and, to be honest, I'm concerned about what's coming and being prepared. On the other hand, I recall while reading Rawles' "Patriots" many years ago that, "if I'm really going to have to do all that to survive, I'm toast".  It was while they were putting in half inch thick steel to bulletproof their retreat.

Perhaps unexpectedly, another commenter answered tomfrompv with a lot of solid advice as a starting point.


As for a coping strategy, does your public image from the street serve as a defense against envy? From the outside you look poor, wearing thrift store pants and repairing an older car, but from the inside you are wealthy in the necessities of life like food, shelter, and medical care. Is your backyard a food garden? Do you have gold coins to give to the sympathetic veterinarian who will X-ray and set your broken bone without reporting it?

Are you the center of a radio kit ecosystem which sells better the worse the news gets? You can't retire, that is not going to work. Social Security is bankrupt, and will continue to decline 10%/year forever. Those big company pension funds are going to be swept into Social Security to keep it going another year; the only portion of it you own is the last check that cashed. If you can withdraw any of that paper wealth and turn it into coins, do it.

Hard coin money fixes almost anything. With money, if WWIII breaks out you could take a "long vacation" in Mexico, Canada, Australia, New Zealand, Spain, Italy, Germany, South America, the Pacific rim...it's a big world out there, and it will never all be involved in war at the same time. You can't fix politics, not even a little bit. But it's practical to prepare to step to the side as the stupid goes charging past.

My starting point is to look after those "necessities of life" like food, shelter and medical care.  If you have medical issues that require regular prescriptions, sorry but you're behind the 8-ball  It's probably too late to take a few years and get out of debt, but do your best to get six months to a year of food put away while getting out of debt.  Live below your means.

Do you really need to look like a pauper?  I don't know, but I don't think you should look like the richest people in your area either.  I don't think you want to stand out on either end.  We have two cars that were purchased used; one for cash and one on payments because it was 0% APR and that's really paying us to take the loan.  Made sense at the time.  It has been paid off for years.  Still, I've had people walking by comment on the cars and act surprised when I tell them one's an '09 and the other's a '13.

Yes, I think it's wise to have silver coins or other barter material on hand.  I think gold is too "concentrated"; too much money in too small a coin (more here).  I think there will be more people trying to counterfeit things like US Silver Eagles than the junk silver coins.  (Junk silver is the usually pre-1965, 90% silver US coins)  Silver Eagles are more uniform in appearance, especially if you have them new, in their mint tube (they're all uncirculated now); by contrast, the junk silver is generally old and used looking; they have the advantage that everyone knows what a dime or quarter is.  I think they'll quickly learn that the silver versions are worth more.  Compared to Eagles, the old coins are dinged up, and usually have black sulfides on them.  If someone offered you a few silver quarters, all dated the same and all looking brand new, that would get your suspicions up.  If they offered you a couple of quarters of different years in different conditions, that would look more believable.

What about other things to barter?  Do you want to have some whiskey or cigarettes around?  I don't drink or smoke and don't have any put away.  Should I?  I can't say.  A major part of this blog has been to emphasize having skills that can be bartered. Learn to fix things.


For example, I think we'll see something along the lines of 1930-38 America. Banks will fail and along with them retiree annuities. The stock and bond market will fail and along with them public pensions. Tax revenues will crater. The govt will inflate the currency while simultaneously banning the sale/holding of precious metals. And all the other crap that went on back then

This is really hard to predict.  I know some financial writers who say what's coming will be worse than '29.  Some banks will absolutely fail, but not all; Dodd-Frank guaranteed that by creating the Too Big To Fail banks.  Unless the government fails, and that's least likely.  Whether or not that leads to widespread failure of public and private pensions isn't as straightforward to predict.  Much of  the public pensions depend on the individual states.  Some states, thankfully like mine, are in pretty good shape financially.  Private corporation pensions?  That depends on how good the company is at managing them, so it will vary with the company.  I don't think there's a real financial manager who doesn't plan for 25 or 30% drops in the markets.  Remember that it's possible to make money in a declining market.  The more time the plan managers have to prepare for this, the better placed they are to survive.

Will they ban precious metals?  Beats me.  I don't think it works any better than gun free zones.  If they banned guns, are you turning them in?  It's not like they don't seize "hoarded" food in bad situations either, though.

I'm not going to tell you to get everything you have out of your 401k or other accounts.  That's a big decision and has enormous financial implications.  Is there a possibility everything depreciates to nothing and you lose it?  The smarter you were about allocations, the less likely that is.  On the other hand, if the collapse is bad enough, all sorts of financial institutions will be in trouble.

If your house smells like food cooking while everyone else is starving, you can expect people coming looking for food.  They will probably not be friendly.  I'm not sure what the best way to avoid that is.  Perhaps eating room temperature food out of the package?  What about the smell on cans and the garbage?  I don't know.

You mention, "Most of us are either too old or think the "year zero" scenario has no chance of occurring,"  I'm in the too old category for one, and think the most likely scenario is what I call the Argentina scenario - because I got it from Ferfal in Surviving in Argentina.  I first posted this in 2010.  I've highlighted the things I think I've already seen in blue text.


If lucky you’ll still live in that same house, Main Street will still be called Main Street, kids will still go to the same school, with a bit of luck and hard work you’ll keep your job… but employees may have to accept a 20% reduction in salary so as to save the company.  Your kid’s school will have fund cuts and some classes may be canceled, the infrastructure may suffer for lack of maintenance due to low funds. The school quickly looks dirty, clearly needing some paint and repairs. As time goes by Main street is full of holes and no ones patches them. Stuff at Walmart is now more expensive. Little by little the packages, cans and bottles start getting smaller (yet the price is higher than before) , you see less and less of those mega super value 50 unit packs. There’s less variety too, they no longer import or produce locally the expensive brands anymore. Too expensive to do so. Crime is getting worse too. Home invasions in towns where it had never happened before, even people getting kidnapped. As more senseless violent crime becomes more common and criminals realize that the poorly paid police, with not enough patrol cars, not enough gas and not enough manpower is just a shadow of what it once was, armed robbery slowly becomes a fact of life across America, and those that don’t want to accept it suffer the consequences.

Every one of the major ideas in this paragraph have been observed in the US.  The rise in prices and drop in package sizes ("shrinkflation") is something I've written about for years  Nationally, we have already had municipalities (Oakland, CA, for example) tell their citizens that they won't pursue burglary and property theft, and an Ashtabula County, Ohio, judge told citizens to arm themselves due to a shortage of Sheriff's deputies.

Our tendency to have a "disposable society" is going to decline.  People will hold onto possessions longer, and wear them out.  A close friend from West Virginia had a great saying that sums this up:  "make it, make do, or do without".  That means a return, at least partially, to a time when more people made much more of their own things.  On almost any weekend around town, you'd hear power tools going as guys would be making or repairing furniture or fixing their cars.  Inside, women would be making or repairing clothing.  If you don't already know: learn how to do these things.

I've written about all of these things many times.  The search bar in the upper left corner actually works fairly well, and you can search for single words like gold, silver, banks, or whatever, but even I go through periods not finding things I know are here.  It's always because I didn't remember the right word. 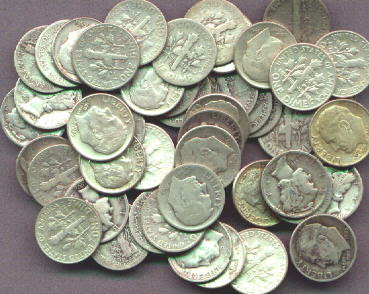