Day Two With The Grail Gun

Today was day two at the range with my new Ruger Precision Rifle in 6.5 Creedmoor.  Mrs Graybeard and I got down to the range a bit late this morning, due to my making a dumb mistake setting the alarm on my phone, but we were there between 8:15 and 8:30.  I took one shot at 25 yards to verify my zero was still there and bouncing the scope and its rifle around for a while hadn't messed it up. Then I went to 100 yards with some Hornady Precision Hunter ammo.  This uses the 143 grain ELD-X bullets but is not "match grade".  I got this in an honest three shot string.  The shot on the left was just to make sure I could get on the target. 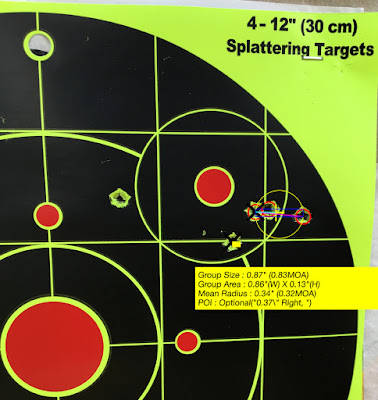 There are five holes there, but I'm claiming that highlighted three shot group on the middle right.  Why?  The leftmost hole was my first shot, ranging to see if I could get on the paper with my rifle zero.  My Ballistic App told me that with a 25 yard zero, the bullet is still rising, and it would hit a little under 6" above where the crosshairs on the scope reticle mark 0.  With my cross hairs right on the bottom edge of that target, that hole is where it hit - and it's 9" above the the bottom edge.  The next three are the one I call my group because they were the next three shots.  There's a fifth hole just to the left of and below that group which was later with a different type of round.


The dimensions and stats on the group are from an app called Sub MOA - the free version.  In the Android Universe, it's called Range Buddy.  For a whole $5 for the "Pro Version", I might give him that just for making this available.  How it works is that you measure a feature on the picture, tell it the true size and the distance, mark your shots, and it calculates those stats for you.  Yes, there's a screen where you input the caliber, projectile data and some other common information.

It's pretty nifty.  I had no end of troubles with it at the range, but managed to save that picture on my phone.  (The icons made no sense to me, and there's no real help built into the app).  Once I was home, I looked up a tutorial on YouTube and got this in no time.

After shooting that first target, I switched to some Winchester match ammo I picked up last week.  Unfortunately,the range was hot and I couldn't walk down to the target and grab a picture.  I took some shots through my spotting scope with my little Ricoh P&S (also POS) camera, and with some gymnastics, got this picture onto my phone and into the Sub MOA app.  I think this is real 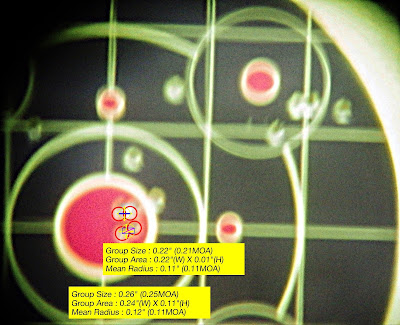 Those were two groups separated by a little time.  I think an honest quarter of an MOA, but let's be pessimistic and call it 1/3 MOA.  I've never shot this well before.  It is match grade ammo (which I've never used before) and the rifle sure seems to be a whole 'nother level better rifle than anything I've ever owned before.

We left by a little after 10, and it was hitting 90 already.  This time of year, I expect that no matter what you're doing outdoors, you should be done by 10.  11 if it's unusually cloudy.

Now there are things I want to understand better here.  I want to understand why the Ballistic App says that the bullet I'm using should be at 5.65" above the point of aim, but it's more like 9".  I need to understand the sources of error there.  An obvious contributor is that my zero at 25 yards isn't really zero, it's about 1/4" high (the bottom two holes here).  That implies my actual zero is closer than 25 yards.  (You're shooting up to get the bullet and optical paths to intersect at a distance.  If it's high at that distance, it means it has already gone through that intersection and is still rising).  Graphically (and exaggerated) (source): 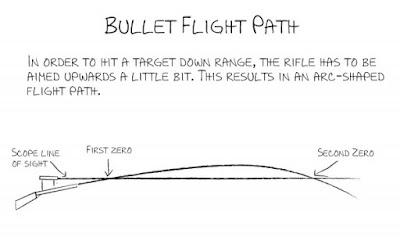 Sure enough, moving the zero distance from 25 yards down to 19 makes the bullet 9" up at the target, but could it really be 6 yards short?  Another factor is that I'm shooting slightly downhill at the 25 yard targets.  I don't know what angle, but it's a steeper angle than I use to get to 100 yards.  (Easiest way to tell: put the phone running the digital level app on the forend of the gun when it's pointing at the targets)  That angle plays into it, too, although I don't think it's much. 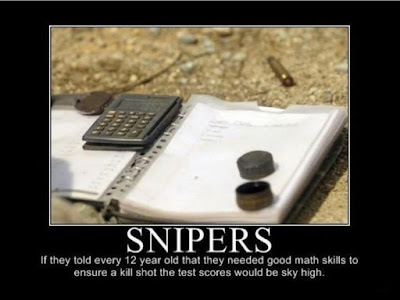