What to Do When The Robots Do Everything?

Let me start out by saying I'm very skeptical of this whole "the robots are going to take every job" meme that's floating around.  First off, as I've talked about here before, the last 20 years of data shows that robot sales go up with employment, virtually in lock step.  Robots "replace" workers in the sense of doing things alongside existing employees as the company expands, if even that.

There are literally billions of people working today, in the sense of doing something to eek out a living.  A Masai herding cattle in Kenya is working for a living.  Are we going to sell the Masai a robot to herd cattle?  Are we going to have robots selling used cars, in your local mom and pop pizza parlor, or selling Christmas trees?  This leads to my second issue: how do we build billions of robots?  Metals have to be mined and refined; plastics have to be made and distributed; and everything built into subassemblies and full up assemblies.  How long will it take to build a few billion?  And don't say, "the robots will build the robots", because the problems are the same.  Who sells the robots and how much do these wonders cost?  There are lots of practical questions nobody is ever talking about.

Have you ever seen any society, anywhere, at anytime in recorded history when people weren't making a living doing something??  And this is suddenly going to end?

So it's with a bit of that skepticism that I look at this week's article in Machine Design, "What to Do When Machines Do Everything?  Don't Panic!".  The piece is a synopsis from a book by the same name put out by a consulting company called  Cognizant Technology Solutions.  They start out with the assumption that AI is coming, the Internet of Things will continue to develop, and that basically it's all a "done deal".  Despite that view, there are some loud and persistent anti-AI voices out there that seem to be raising lots of valid concerns.


The authors do not sugar-coat the inevitable future. In chapter one, they state how this next stage of technology and business is the same as what we have experienced in the past. Just as “the First Industrial Revolution was powered by the invention of the loom, the second by the steam engine, and the third by the assembly line, the fourth will be powered by the machines that seem to think—what we refer to in these pages as “systems of intelligence.”

You may have come across the prediction from Oxford University that that 47% of United States jobs will be automated away by 2025 - eight years from now. The authors of the book are quick to tear this claim down. Their estimates are more like 12% of jobs will be lost to automation over the next 10 to 15 years (by 2032, if you're counting).  This seems closer to what the last 20 years of experience has taught us.  The authors' take on it breaks down like this:
Yes, some jobs will be lost.  There's currently around 150 Million jobs in America, so 12% of jobs "at risk for being taken over" means 18 million people could be affected.  Yet, the job creation line says 13% net new jobs, which means 19-1/2 million new jobs will be created.  Obviously the robots are part of job growth, not destruction.

But what that really means is that certain aspects of jobs will be automated.  Think the kind of "collaborative robots" we've talked about here before, but with a twist.  With more simulated intelligence, they can move closer to the front offices.


According to research from the Bureau of Labor Statistics and Forrester Research Inc., production and installation/maintenance/repair will be impacted by automation, both from 6% in 2015 to 60% and 61%, respectively, in 2022. Management and business-related jobs will be impacted by 92% in 2022.

Ever seen your boss do something idiotic?  No, not your boss (especially if they're reading this) but I bet you've seen other managers in your companies make some pretty boneheaded moves.  The possibility of AI improving management and business decisions holds promise.  The automation of production, installation, maintenance and repair is exactly like the collaborative robots that we've talked about. Frankly, if faced with a task like climbing into my attic to do maintenance on my air conditioner ducts I could instead rent or buy a collaborative robot to do it for me, I think that's a good thing. 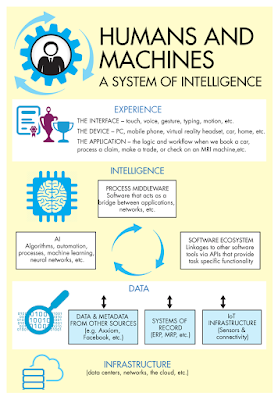 The new machine ushering in the new technology wave will be a system of intelligence that combines software (algorithms, business rules, machine-learning code, predictive analytics), hardware (servers, sensors, mobile devices, connectivity), data (contextualized and real-time), and lastly, the input of human operators.
...
Today, automation and AI are in its infancy. We are in the scope of Narrow AI (also known as weak AI), which is being used by Facebook, Amazon, Netflix, and Google (FANG) types of vendors. FANG vendors are using Narrow AI to create voice assistants like Siri or Alexa and intelligent GPS like Waze. But that is not the end game.

There will be General AI on the level of movies like Ex Machina, where the machine can determine the task done just by observational input. Then there will be Super AI—AI that can create other intelligent life almost on a robot-takeover level. However, worrying about this is an exaggeration. As pointed out in the book, Andrew Ng, Chief Scientist at Baidu Research, points out, “Worrying about [general or super] AI is like worrying about overpopulating on Mars before we’ve even set foot on it.”

(Ex Machina?  You can start your "Stupid Siri Stories" now)  I have a bit of a problem with Dr. Ng's assessment that we shouldn't “worry about advanced AI” now, but worry probably isn't the best word.  It might be that I've been influenced a bit by the likes of Musk, Gates, Hawking and some of the others who are plainly very concerned about it.  Perhaps it should be that there are things that we don't allow the AIs to do. 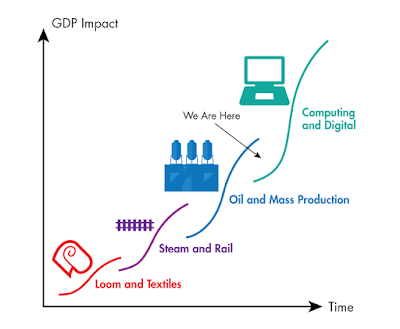 Graph: the authors' idea of this "fourth industrial revolution.  They explain:


The S-curves lay out the different industrial revolutions we have undergone as a society. With each curve, there is innovation, stall, rapid expansion, and then maturity. If we take the internet as an example, innovation came with the burst of computers, and the stall was the internet bubble burst. We are currently in the stages of rapid expansion, with companies like Facebook, Siemens, and Nike using the innovations of the last 15 years to mature the products of the digital age.

(Really long time readers will recognize the sigmoid growth curve as something I brought up long ago.)


To help navigate the fourth industrial revolution, Cognizant worked with Global 2000 companies to develop a structured approach called AHEAD:

Halo: Leveraging the data exhaust generated by products and people via their connected and online behaviors to create customer experiences that continue to evolve.

Enhance: Using computer systems and tools like AI to increase the output of jobs.

Abundance: Through the use of new technology, having the ability to lower the price point of existing offers, akin to Henry Ford and the automation line.

Since Cognizant is a consulting company, the rest of the piece is structured as advice for their customers.  Think of automation being used to reduce cost by 25% and increase productivity by 25%.  Wouldn't you want 25% more pay along with 25% less work to get it?  Put simply, let robots do the things they're best at and let humans do the things we're best at.  Automation or AI should specialize in tasks that demand low human judgement (repetitive manual labor - say burger flipping or many assembly line tasks), low levels of empathy (don't let your robots near customer service), and anything that requires the handling or generating of data. There will be too much data in the future for humans to process; best leave it to the machines. 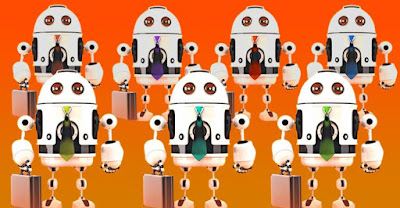 All in all, I think this view of the coming "robotic/AI" future is the most pragmatic and realistic I've read in a while.