An anonymous commenter to my Grail Gun post two days ago said,


What scope are you using? That looks like it says "Nikon" but that's all I can tell. If you're going to talk precision shooting, you need to talk about scopes!

That's a good point and I should have mentioned it.  They were correct in that it really is a Nikon; a Nikon Monarch, 5-20 x 44 with BDC (Bullet Drop Compensation) reticle.  It's several years old, like from 2010, I think, and for the last few years has lived on my AR-15 where it's too much scope.  I'm sure there's a story there, I just don't remember why it's on my AR.  I thought I bought it for my DPMS LR-308, but that has a lower power scope on it.

If anything, I've probably run too much power over the years.  I have the typical "old guy eyes" problem of needing more magnification, even for things like labels.  On the other hand, it's easy for optical designers to add more power.  You should just know that you need a bigger objective (front lens) when you add power.  On the other, other hand, I find I can reliably shoot with a less magnified view, but I can't see the bullet impacts.   I've been bringing a good spotting scope for that.

The challenges in the optical design are (1) zoom range and (2) keeping the image at the same spot as the magnification changes.  For #1, the 4:1 range of this Monarch seems to be as wide as Nikon will make.  I'm sure you've noticed 3:1 ranges like 3-9 and 4-12 are pretty commonly made and used hunting scopes.  In camera lenses, you can get a 10:1 range like this 50-500 Sigma, and while they don't deliver as sharp images as lower range zooms, they're available.  In rifle scopes, it seems they go to a 6:1 range, like a 5-30.  I think I'd like something more like 40x for long ranges than the 20 the Nikon gives now, but we'll see.

Most of you know the experience of having to move your head around to get the image centered in your eye and see the whole image.  A good scope will keep this image in the same place as you adjust your zoom, while a less useful design makes you need to move your eye closer to the scope as the magnification goes up.  It's harder to design that way than to let it drift forward or backward, so it's more expensive, but worth it.

When I moved this scope to the RPR, I dug out my old Laserlyte boresighter (similar to that model, but years older).  This design operates by attaching a plastic adapter onto the narrow end and spreading it with a tightening screw until it's a snug fit in the barrel.  I couldn't get it to work, the plastic had split, and finally shimmed the skinny "tail" of the piece with masking tape until it would fit in the barrel.  It didn't work like it was designed but I thought it would get me on the paper and within a couple of inches.

This was Tuesday night.  The next day, I went to Laserlyte's customer service website and left a "contact us" note to ask if these replacement adapters would work for me. Within about a day, I got an email back asking for more details on my boresighter, and if I could send pictures.  To shorten the story, once she saw it, she was able to find the model number and said they'd send me a replacement adapter by 1st class mail.  For free.  Considering I bought this in around 2012, from a surplus dealer, I consider that exemplary customer service from Laserlyte.

The adapter's not here, though, but I thought that even though the tape-shimmed laser wasn't as good as the design should allow, it should still get me on paper at a mere 25 yards, right?  Not a chance.  Friday morning, on my "shakedown cruise" to the range, I thought I needed to call it a day and come home after my first two shots.  Given an 8" circle on an 8-1/2x11 piece of paper, neither shot was on the paper at all.  On my second shot, I thought I saw the grass on the berm above and behind the target move, but no marks I could identify at all on the target or backing.

After a bit of confusion/frustration/annoyance, the idea of using the old school method of looking down the barrel and then centering the cross hairs popped into my head.  Thinking of that clue that I was really high, I cranked the POA down.  I saw a hole on the backing.  Then I cranked it down a LOT.  A crazy lot.  The first shot now was within the first ring, so under 1" from the center.  Cranked some more, took a couple more shots and the two made an enlarged hole.  Which is probably a wild shot for a 1600 yard rifle. 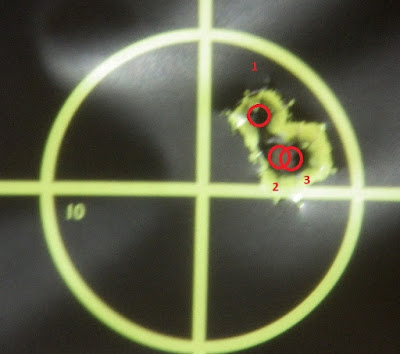 That circle is exactly 2" on the outside of the yellow line.  I realize zeroing a scope at bad-breath distance (well, maybe for Gilroy, California) isn't a newsworthy picture, but ... hey, why not?