Just over two weeks ago, Fed Chair Janet Yellen was commenting on the prognosis for the economic future.  She does this all the time, only this time she let slip what might be a terrible announcement:


Would I say there will never, ever be another financial crisis? You know probably that would be going too far but I do think we’re much safer and I hope that it will not be in our lifetimes and I don’t believe it will be.  [Bold added - SiG]

She doesn't believe it will happen in our lifetimes?  Just whom is she referring to there?  You got a mouse in your pocket, Janet?  I assume there were both 20 year-old and 80 year old listeners; does she honestly think that no one alive today will ever see another crash?  On the other hand, maybe she meant the royal "our" and just meant herself.  Did she just let it slip that she recently got a horrible medical diagnosis and expects to be gone in under 6 months?

Saying "we'll never see another crisis" seems to me to be like saying, "I've never had a flat tire", or "our pitcher has a no-hitter going"; that sort of "famous last words".  If you're a betting person and hear something like that, bet that the opposite of the statement is coming.  Simple "reversion to the mean" is reason enough.

There's already a reasonable argument we're likely to see one before the end of the year - five months away.  As Bill Bonner puts it:

Second, debt levels are higher than ever. There is said to be more than $250 trillion worth of debt worldwide. And running up debt is like stacking blocks of wood. The higher you stack them, the more likely they are to fall over.

Ms. Yellen says the banks are better-regulated and less likely to fail in a crisis. But the latest stress test shows bank vulnerability to credit card debt has actually increased.

Besides, bank debt is only a part of the picture.

Personal debt is a problem, too.  Quoting again from Bonner, who creates an interesting illustration toward the end.


Consumers are running into a debt ceiling of their own. They’ve got $14 trillion of household debt.

Without real job and income growth, they can only maintain standards of living by borrowing more. But they already owe more than they did on the eve of the 2008 financial crisis; their knees are beginning to buckle.

Used auto prices are falling, putting the whole structure of $1.2 trillion worth of auto debt in danger.

Student loans – another $1.2 trillion of debt – are increasingly uncollectable.

And states and local governments have $5 trillion worth of unfunded pension liabilities.

Corporate debt is at record levels, too, near $8.5 trillion.

In the next crisis, many marginal borrowers will have trouble paying back their loans. Write-offs, defaults, and bankruptcies will blow up.

And don’t forget that the whole world economy is interconnected.

That whiff of smoke you smell could be coming from China. That country has become a giant Debt Depot.

And somewhere… in the corner of some abandoned warehouse, a small pile of debt-soaked rags smolders.

When the flames break out… sparks will fly across the Pacific in a matter of seconds. Minutes later, the entire world’s finances will be aflame.

In light of all this, maybe Dr. Yellen can say she doesn't believe she'll see another crash in her lifetime because she knows she won't be around long enough.   It's really too bad.  We haven't mocked her nearly enough. 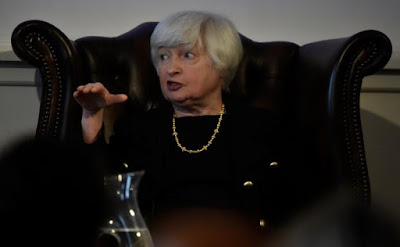