Maybe I should call it the WTF of the day.  "Man accused of smuggling king cobras in potato chip cans".  Complete with photograph. 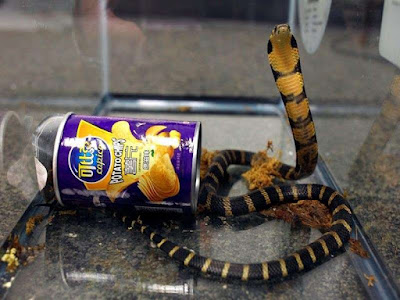 Just your typical wildlife smuggling case.  Note that a king cobra of that size is a juvenile.  Adults are around 10 feet long or more, with the record being over 18 feet.


The three king cobra snakes — each about two feet (just over half a meter) long — were found in March when Customs and Border Protection officers inspected a package that was mailed from Hong Kong, prosecutors said. There were also three albino Chinese soft-shelled turtles in the package, authorities said.

Federal agents removed the cobras but delivered the turtles to Franco's home in Monterey Park.

They followed it up with a search warrant and checked the home of Rodrigo Franco, 34.  They found several other reptiles protected under US law.


Franco admitted to an agent from the U.S. Fish and Wildlife Service that he had previously received 20 king cobras in two other shipments, but he said they all died in transit, according to court documents.

At least he didn't use the line that they were lost in a tragic boating accident.  I wonder where they all ended up?  Private collectors?