When Your Grail Gun is an On Sale Gun - Buy It!

I've been upfront about having rifle lust for the Ruger Precision Rifle since they came on the market a couple of years ago.  I've kept an eye out for them locally, seen one or two at a gun show, but waited for the price to break.  Readers familiar with the RPR will know that they've essentially been able to sell everything they make at full list price since the introduction in 2015. There have been occasional exceptions in the form of Sales here and there, but nothing that stuck.

A couple of weeks ago, Palmetto State Armory had a sale on them at $1099 - the $1100 street price hinted at in 2015.  After a bit of comedy or errors, I took the plunge and ordered one in 6.5 Creedmoor at the last possible minute of the sale (OK, last hour).  That was around 11 PM on June 22nd.  It came home with me Tuesday afternoon, 7/11/17.  Yeah, it's a commercial rifle and they all look the same, but as they say, "this is my rifle".  Despite the precarious looking position on my Tipton vise, it's stable.  It's actually front heavy and would trip forward if the stop wasn't there. 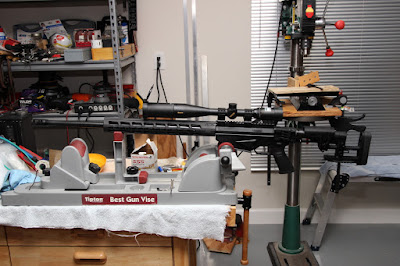 The comedy of errors was that a friend had pointed it out to me and I had quickly forgotten it was a short duration sale.  The website said, "Good until 12PM EST" and I joked with my wife that I didn't know if that meant 11 AM or 1 PM because of us really being on Daylight Saving Time, but I hadn't remembered to go look until it was almost 1 PM.  After all, they probably just meant 12 PM "eastern" and used an old note.  Then I clicked on "refresh" and the price came up ... $1099.

Could they have meant "good til midnight"?  That conflicts with the date because "Midnight on 6/22", is 12 AM, not PM, and it's 12 AM on the 23rd.  I had to think about the purchase and figured I'd try to refresh the page later and see if the price was still there; and it was.  After much anguish, I finally pushed the "Buy" button and started the process to buy the new rifle.  After the "10 business days" wait, PSA shipped the gun to my FFL.

Considering it's half-past July, this will likely mean a couple of trips to the 200 yard range to try it out and get a good feel for it, then it will stay in the safe until October or so, depending on weather.  While waiting for it, I've been studying everything I can get my hands on about the rifle.  Between the various forums I've found, the most active RPR forum is on Arfcom - AR15.com.  Of all places.  71 pages.  I haven't read all of it, but I've read everything that looked interesting since the new model came out last year.  They also have a much shorter but useful thread on Factory loads for 6.5 Creedmoor, and a good Precision Rifle forum for all types of long range shooting.

My first purchase for the rifle was a pair of RCBS reloading dies and a couple of boxes of Hornady 140 gr ELD Match ammo, which will become reloading brass.  As I've been reading, I'm encountering the recurring idea that guys are saying their commercial match grade ammo is doing so well, they don't think reloading is worth it!  I've seen pictures of Federal OTM (Open Tip Match) doing 0.33 MOA and several other commercial rounds doing under 0.5.  I have a couple of boxes of the Federal OTM on the way.

No, I have not made it to the range, yet.  Tomorrow is very likely.

First off: they charge your credit card the instant you hit the button, but didn't ship for two calendar weeks.  I suppose I'm spoiled by the rest of the online shopping I do, like ordering two Rubbermaid containers on Amazon for $10 and having them lovingly left on my doorstep two days later - on a Sunday morning.  While a rifle costing 110 times that takes two weeks to even ship.  If Bezos wanted to dominate the firearms industry, his competition is Buds, Impact, PSA and another couple.  I see them as easy targets.  (This would require Bezos getting his head out of his a** about guns and that would probably require a 2 ton shop crane - maybe explosives.).

Second off, PSA says they won't do anything in terms of exchange/return.  If the gun appears broken in shipping, contact UPS; otherwise, contact the manufacturer. Thankfully, those occurrences are pretty rare.

The main reason I did it at all, (aside from the good price) was recommendations from friends.

Expect more talk about this and review fodder as I get more familiar with it.