Tell Me About Your Favorite Ballistics Phone/Tablet Apps

That's right, homies, it's info bleg time again:  I'm looking for a better ballistics program to carry with me to the range: either on my phone or my tablet.  I'm in the Apple universe (iOS).  Hopefully, we could collect info on everything available so that maybe other people will get utility from this post and not just me.  You might have noticed that in the list of the most read posts in the right column, that my most read post ever was a little post called "A Little More About .308 vs 7.62x51", and was a follow-up to an earlier post that is apparently hardly ever read.  It would be great to be as useful to other people as that post.

Within the last couple of months, I got a link to this "11 Best Ballistics Apps for Every Shooter" from some email list I'm on (probably Guns & Ammo), but I find it's almost three year old information.  All of the apps have probably been updated by now.

I have the Winchester app on my phone, and despite it's limitation to only Winchester-branded factory ammunition, I've used it to get "close enough" to hit the paper and then make adjustments from there.  Aside from that, I'm just looking around to see what else is out there and what might be better.  It's hard to split this task between online and portable application, but I'd like to be able to have a calculator at the range that allows me to change the conditions or the load I'm using.  Hornady has a cool "4 DOF" (Four degrees of Freedom) calculator that's free to use on their website, but there doesn't appear to be a portable version of that.  Naturally, it's based on Hornady's bullets.

Federal Premium also has a free online calculator, too, and allows you to enter customized information or use their factory loads.  Nosler, and Berger both have an app that's centered on their bullets, but I haven't gone down a list and checked all the manufacturers.

In the realm of the iPhone apps, Applied Ballistics has an app that seems to be good, as you might think from a company with their pedigree.  Work by their chief ballistician, Bryan Litz, has been cited as a source in other apps in that "11 Best" collection, such as Shooter, and Ballistic App.  As usual, the ratings on the iTunes store are fairly useless; this time because most of the apps don't have enough reviews to have a rating posted.

So how about it, dear readers?  Any input on which one of these is the one to get?  Is anyone more popular among readers? 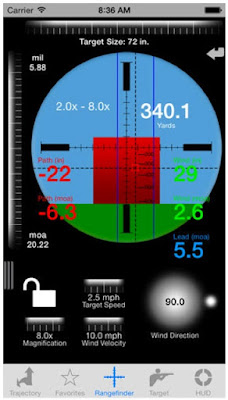 By the way, it appears these apps have been targeted by the anti-gun nuts.  Most of them are rated for users over 12 or over 17.  The description of those ratings don't seem to describe anything about a ballistics app.  For example, the "12+" category says, "Apps in this category may also contain infrequent mild language, frequent or intense cartoon, fantasy or realistic violence, and mild or infrequent mature or suggestive themes, and simulated gambling, which may not be suitable for children under the age of 12"  While I don't own any of these apps, I can't see any of the things they warn against in a program that does math for the user.