About that Alexandria Ocasio-Cortez, the celebrated socialist running in New York City.  The press makes it sound like she's somehow important; like the Democrat primary voters electing her over a better known candidate are some sort of vanguard of what's to come, and not the reaction of a group that's already lock step in line with Chairman Mao.

To begin with, her win wasn't the tiniest bit noteworthy.  I find the best summary I've read is from Divemedic at Confessions of a Street Pharmacist soon after the election:


A closer look at exactly how she won the Primary indicates that her win is less about a sea of change and more about voter apathy. She won just shy of 16,000 votes out of 27,000 cast, in a district with over 236,000 registered Democrats. That equates to a voter turnout of under 12 percent.

She won by about 11,000 votes out of 236,000 registered voters; that means not even 5% of the voters in the district voted for her.  Her margin of victory could have been wiped out if something like 30% of the district turned out to vote instead of the 11-1/2% that did.

Need I remind you this is New York City, a deep, sapphire blue city that elected communist Bill DeBlasio as mayor ?  Generally, the population voting in primaries will be different from the population voting in general elections; in general, primary voters are more toward the edges of their parties, not toward the center.   In this case, it seems Ms. Ocasio-Cortez actually showed up and campaigned while her opponent took his victory as given and lost because of his overconfidence.

So what?  She hustled, showed some good, capitalistic, you-work-for-it-you-get-it spirit, right?  The problem is she's selling socialism; she's selling other people's work.  You don't have to go far to find she's an uniformed twit who lied about her humble history.  Her platform is free stuff for everyone: free college, free trade school, free socialized medicine, criminal justice reform, a "green new deal", the ever popular "commonsense gun reform", "equal rights for all" (whatever that means today), forgive all existing Federal Student Loans, guaranteed Federal jobs labor camps for all, and ... wait for it... Abolish ICE!  (I thought Miguel at Gun Free Zone had a good summary on what we'll get when we abolish ICE - don't go there if you have a delicate stomach).  She mouths the socialist mantra that "we're the richest country in the world".  Actually, we're not.  We're the most indebted country in the world in total debt: over $21 Trillion at the moment.  The only "wealth" we have is by maxing out our credit cards and paying them off with other credit cards.  We're the most indebted country in the history of the world.  And that's just what has already been borrowed. It says nothing about looming pension problems, medicare, or anything else.

You know the story: how much does this cost?  Where does the money come from?  In a time when we should be cutting spending and trying to reduce deficits, she wants to increase costs everywhere.  Don't bother asking her; you'll get no answers.  Well, you'll get people defending her saying "tax the wealthy", just as Venezuela, Cuba, Zimbabwe and so many other places have done before. 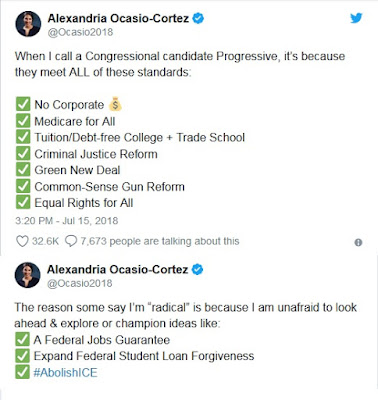 (excerpted as live tweets on The Blaze)

She followed this wisdom with the equally brilliant bumper sticker quote, "If we’re not courageous enough to push the needle forward, we will get taken backward."  Years ago, I worked with a guy who had saying for times when someone said something phenomenally illogical.  He'd say, "you just can't argue with logic like that".  It was good because the person didn't realize how stupid they sounded and would leave.  I came to prefer and use, "you can't out think someone who isn't thinking".   Either one goes well here.