Trying to Make Sense of The Opioid "Epidemic"

A couple of days ago, I sat down to collect my thoughts on the so-called "Opioid Epidemic" in the US.  I found it a lot harder to make sense of it than I would have thought.

Let me backup for a minute and tell you where I'm starting from.  Borepatch had a great article on the big picture; as has Bayou Renaissance Man.  One of the aspects frequently talked about is how high the addiction and death numbers are in places like Ohio and West Virginia.  The Charleston (WV) Gazette-Mail wrote (last December) writes:

The unfettered shipments amount to 433 pain pills for every man, woman and child in West Virginia.

This doesn't begin to tally up the damages, not to mention the lives of the addicts that OD.  What about the crime committed trying to steal drugs?  What about armed robbery of medical clinics, drugstores, veterinarians and even robbery of people followed home from those places?  Exactly who the villains are depends on who's telling the story.  To the writers at the Charleston Gazette-Mail, it appears to be that the drug companies are the villain.  Liberal media sure hates them some big business!  To the determined libertarians, it's the government and the War on Drugs - and there's tons of collateral damage there.  To the CDC and some doctors I've read online, it's the doctors and especially "pill mills" writing the prescriptions.

That summary started to bother me.  When the Gazette-Mail said the drug companies shipped in "433 pain pills for every man, woman and child", it sure sounds like too many, but when you think about it, well, what does that mean?  That number was obtained by dividing the number of pills sent into the state by the number of residents over six years.  Looked at as pills/person in 2191 days (six years), that's less than 0.2 pills/person per day.  Now nobody takes 1/5 of a pill per day, so you're talking 1 person in 5 is taking one pill a day.  Only opioids aren't typically one pill once a day.  If those are prescription pills, the person is probably going to get four or five a day for a week or two.  That also cuts the number of people.  Now you have one person in 20 or 25 taking pills every day.  You're talking that statewide, 5% of the people may be recovering from an injury or surgery or something.  Some of the people are getting those strong pain pills daily, and they skew the numbers even more.  Maybe it's 4% or less of the population getting those pills.

I think "less than 4% of the population being treated for an injury or recovering from surgery" on any given day sounds pretty normal.  It sounds rather different than "433 pain pills for every man, woman and child", doesn't it?

What's a normal rate for the prescription of these drugs?  There have been heroin overdoses and deaths for as long as I can remember - and centuries before that, too.  So what's new here?  How do I know if something is really going on and it's not just the media being pushed by the people who hate "big pharma" or it's not just a push to get this covered by what certainly seems like the coming single-payer, socialized medicine fuster cluck we're heading for?  Are we really seeing something different?

I can't answer what's normal, but if you can trust the Centers for Disease Control, they present data that appears to show that after a long period of low, but steady number of overdose deaths, starting in 2013 or '14, the rate began to really climb.  (looking at the blue numbers in this graph, 2012 is up less over 2011 than 2013 is over 2012).  This plot goes back to 1999, but I saw an extension to 1990 and it didn't look very different than the first few years of this plot. 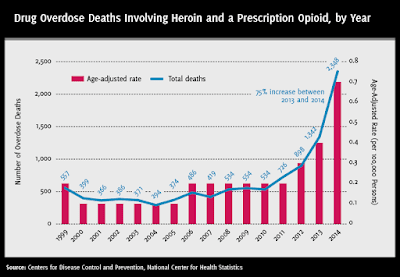 So if there's really a problem, and it really seems to be bad in West Virginia and Ohio, what's really going on?

I got a new perspective from a seemingly unrelated article I read last week.  I get the Ammo.com weekly newsletter/ad, and they linked to this long but haunting piece on the Bitter Southerner.  I'm absolutely a Southerner, but bitter isn't in my makeup.  Still, the phrase that hooked me into reading was something like, "how do you have a dialog with people who automatically add the word 'trash' whenever they hear the word 'trailer'?"  While I've never lived in a trailer, I've visited many, had family that lived in one, and partied in a few more.  The expression they refer to, though, seems to be a stereotypical elitist phrase - a disparaging term the "northern and coastal elites" use against the southerners in flyover country.

After describing a world more like the one I grew up in than not, author David Joy threw in this paragraph.

I have never reached that level of desperation in life, and for that I'm incredibly thankful.  And it is true that some of the worst death rates in West Virginia come from coal mining counties where EPA policies caused shutdowns of various mines.  The thing is, I don't think that sort of reaction to desperation - doing meth or heroin - is or could be widespread in a population. 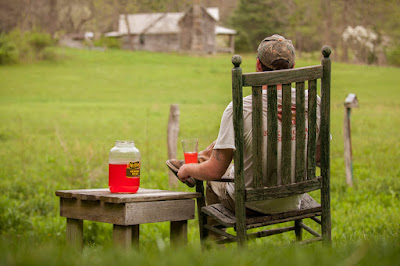 Red Kool-Aid in an old pickle jar (note to coastal elites: the jar is recycled!) - pure southern.  From Bitter Southerner.

The problem with this explanation is that the "epidemic" isn't just among the trailer population in the rural south.  The death rate is the same ballpark in New Hampshire, Massachusetts, Rhode Island and nine other states as it is in Ohio and West Virginia.  The epidemic affects bored kids from "good backgrounds" with not enough to keep them occupied and all sorts of "good kids", not just unemployed rural southerners with no economic future.   Yes, some people get prescribed narcotics for chronic pain and get addicted, too.

On the other hand, I believe there's evidence that there are such things as addictive personalities and some people are more inclined to those behaviors than the majority.  Not everyone can go the route that Bitter Southerner describes.  I know that's not a "politically correct" view, but I often wonder if our modern, "everyone can get addicted to something" mindset is just a way to get addiction treatment added to the "universal health care roster" that everyone pays for - just like getting retired widowers to pay for maternity coverage they'd never buy. 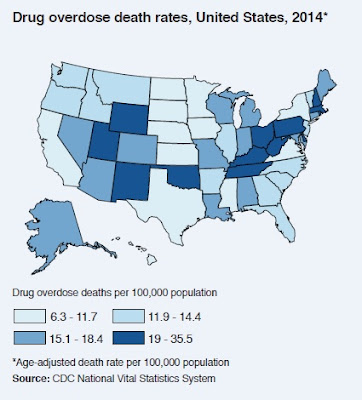 Ultimately, though, the soul-searching and navel-gazing does nothing about the problem.  The War on Drugs is no solution.  First off, if it was doing anything worthwhile the price of those drugs would be too high for the desperate people who only have $20.  Condemning the pharmaceutical companies doesn't do any good, either.  The couple of groups in the few companies that sold their pain pills as not being addictive when they're really very addictive should be investigated for fraud or improper practices and charged where appropriate (whatever the charges should be).  Locking up doctors for prescribing pain medication for patients doesn't help doctors and it doesn't help patients.  Shutting down pill mills dispensing "narcotics by the bag" has been blamed for forcing users to heroin (these guys make my head hurt).  Living in pain is bad for your health, too.  All of medicine is a compromise, just like all of engineering.

Although it's painful to say it and I'm sure there will be objections, the people responsible for the opioid addicts are the opioid addicts.  If the libertarian creed is "don't hurt people and don't take their stuff", the opioid addicts are the ones violating that.  They're the ones raiding our wallets.  With the WoD, we pay in money and loss of freedoms.  In the case of doing a Portugal and going full legalization, we pay in money.  In both cases, we pay any other social costs. Without the WoD, perhaps we recoup some of the billions poured into that bottomless pit.

Wait.  If we go full legalization it still costs us?  Who do you think pays for those detox programs we hear about working in Portugal?  Likewise, I really doubt that there are no health care costs at all for drug addicts even if it is legal.  Will it be cheaper than the WoD?  More than likely.  Even if we do the most heartless stuff you can read online and either just let the addicts die or do like the Fed.gov did during prohibition and actively try to kill them, it's still going to cost us.  If nothing else, someone has to pay to bury or otherwise handle the bodies.

I don't see any way to handle the opioid problem that's a Good Solution.  The best we seem to be able to find is coming up with the least awful option: minimizing bad, not maximizing good.  More freedom is always better, but there's still a Shop Vac attached to your wallet even if there is no WoD.

The desire to get high seems to be a fundamental human drive.  Judging by the cats' reactions to catnip, it's not limited to humans.  There will always be some percentage that become addicts.  Given that, it seems like the least awful solution is full legalization.  I don't have an estimate for what all the other costs of that will really be. I am, however, opposed to the "legalize it and tax it" mantra.  Ask Eric Garner how that "just tax it" thing worked out on cigarettes, which have been legalized but taxed forever.

And none of this is going to happen.  If we have a senate that can't get rid of clearly unconstitutional meddling by the Fed.gov hydra taking over 1/5 of the economy, the entrenched deep state will never allow legalization.  The law enforcement industry, the civil asset forfeiture industry and all the other pieces of gravy train that keeps them sucking on our wallets is simply incapable of thinking they should give it up.

The title of this piece, "Trying to Make Sense of the Opioid Epidemic" is what this is all about.  I don't pretend to have any answers.  I'm just simply trying to make sense of it.