Trying to Make Sense of The Opioid "Epidemic" - Part II

I spent a really long time writing the first part of this, first intending to put it up Saturday, but giving up after a little over two hours.  Yesterday I spent more time, perhaps another four hours.

Why?  After a while researching, I started feeling like I was being played.  Like the whole thing was a scam designed by someone for some unknown purpose (but that probably involved getting lots of government money).  It wasn't until I found that graph from the CDC data that I started to think maybe something really is there and there really is an increase in overdose deaths.

I find that getting away from the computer, picking up a guitar and playing some scales and mindless exercises will allow my mind to wander in more productive ways than sitting here.  Blogging isn't exactly a high-stress life, but I find that my brain will follow more idea trails when I'm not trying to put together a post.  It wasn't until after I posted it and sat down to play that the realization occurred to me that just because there really may be more heroin overdose deaths, that doesn't mean we're not being played.  Someone could be taking advantage of a situation that developed on its own.

Cui bono?  Who benefits?  As always, start by asking that.

Thankfully, while I was playing guitar, Mrs. Graybeard (who can be a much better search engine weenie than me) started asking some questions.  It starts with a simple observation: have you noticed the push for every cop, every paramedic and every rescue group in the country to carry naloxone?  There was even a story about librarians administering it to addicts to save their lives.  Have you heard that the price of naloxone has gone up at least 17 fold in the last few years?  And isn't it interesting how everyone has heard the complaints that the makers of (epinephrine) epi pens, Mylan, hiked their prices 4x but no one seems to complain that naloxone has gone up 17x?

Going down that rabbit hole leads directly to Hillary Clinton and the Obama administration.  This is according to the Wikileaks emails found here.  You should read the whole thing.  Someone sleuthing around in the Wikileaks archive posted this (there are grammatical and other errors in here, but I've left the author's words as found):


There seems to be money flowing into the Clinton Foundation from big pharma. The CEOs are donating to Hillary's campaign. On the campaign trail I've seen Bill Clinton name drop the drug naloxone. The recent emails on wikileaks confirms that the one of the goals of the Clinton Foundation is to make this drug be everywhere. One of the manufactures of this drug is Hospira, a company recently bought by Pfizer.
...
There seems to be serious conflicts on interest. been the campaign and the companies. For example Clinton wants to give these campaigns 7.5 billion dollars through federal programs. This is an OP-Ed from Hillary from last year:

Today I’m releasing a strategy to confront the drug and alcohol addiction crisis. My plan sets five goals: empower communities to prevent drug use among teenagers; ensure every person suffering from addiction can obtain comprehensive treatment; ensure that all first responders carry naloxone, which can stop overdoses from becoming fatal; require health care providers to receive training in recognizing substance use disorders and to consult a prescription drug monitoring program before prescribing controlled substances; and prioritize treatment over prison for low-level and nonviolent drug offenders, so we can end the era of mass incarceration.

The call for Naloxone by name was echoed by Tim Kaine - before he became her running mate in the last election - and by John Podesta.  Call it crony capitalism or crony socialism, either way it's corrupt to the core.

The drug isn't under patent, so there can be generics.  Hospira/Pfizer is one of only a few manufacturers and they've all jacked their prices up.  The defense seems to be "but we don't charge as much as the other guys".  Are the prices a function of supply and demand or "get it while the gettin's good"?

The states are jumping on the bandwagon, too - along with first aid instructors and even gun bloggers.  Everybody is trying to get first responders to carry naloxone or the narcan nasal spray.

Conspicuous in its absence is that none of the governments seem to be pushing anti-addiction treatments and therapies, just the drugs.  Admittedly when someone is comatose and ready to die from their OD, they don't benefit from counseling, but without breaking the addiction cycle they're probably going to need more of the drug someday.

It could be that the cartels are supplying heroin more cheaply than before and usage patterns are shifting to the cheaper heroin.  When the cartels cut their heroin with cheaper fentanyl, it's easier for addicts to overdose and die.  But the heroin overdose problem is not the myth that it's prescription drugs and it's entirely possible that a bump in heroin deaths is being exploited all the way around.

Invoking the specter of prescription drugs being used improperly appears to be an attempt to lump heroin and prescription drugs together as one massive problem which makes people who are taking prescription drugs for post-surgery pain afraid of becoming addicts or overdosing.  They're different problems.  There was a National Survey on Drug Use and Health (NSDUH)  run by the department of Health and Human Services (HHS) that said:


According to NSDUH, only a quarter of people who take opioids for nonmedical reasons get them by obtaining a doctor's prescription. Hence the sequence that many people imagine -- a patient takes narcotics for pain, gets hooked, and eventually dies of an overdose -- is far from typical of opioid-related deaths.

According to that linked article, opioid-related deaths are rare even for patients who take narcotics every day for years. The CDC cites "a recent study of patients aged 15-64 years receiving opioids for chronic noncancer pain" who were followed for up to 13 years. The researchers found that "one in 550 patients died from opioid-related overdose," which is a risk of less than 0.2 percent. (I would assume from how that's worded that the study was not just on 550 patients, but on a bigger number.  A study of 550 people would be too small).

So what do I think is going on?  First the disclaimer: bear in mind that I'm a paranoid old man (although not as paranoid as some of y'all!).   Conclusion, we are being played.  We're being played by the makers of naloxone, and those few drugs used to treat addicts and ODs.  We're also being played by the "addiction treatment industry" and recreational drug lobby that want to normalize heroin (like these folks, I think).  They're  scaremongering.  If they can convince Soccer Mom Suzy that heroin from the Mexican cartels is like the pain pills that she gets when she gets a wisdom tooth pulled, they can scare her.  They can use a death from a heroin overdose to get Suzy to advocate more money for addiction and overdose treatments.  I wouldn't hesitate too much to say we're being played by the CDC, as part of the general thing we see in every Fed.gov agency, loosely translated as "Don't cut us! We're valuable!"

That entire paragraph seems to describe byproducts of the WoD, so completely tossing our WoD and all its infrastructure would profoundly change all of it.  But like I said yesterday, that's just not gonna happen.  Far too many cronies and Deep State swamp creatures make a living off the WoD.  They will protect that turf and I don't see much chance that the WoD goes away.  If the country economically collapses and has to reset, maybe it will be too low priority to worry about the WoD.  For a while. 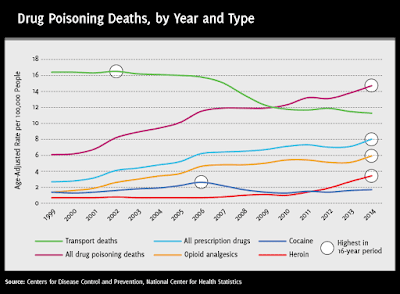