One of Those Guys We All Should Know, But Few Do

Have some USB connectors on your computer?  Of course you do.  They've become standard on just about every computer made in the last 15 years, and go back to the late 90s.  Meet the guy who was probably the most important co-inventor of the USB interface, Ajay Bhatt, now retired from Intel. 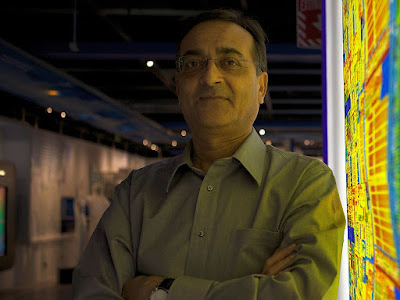 Do you remember the days before USB?  With serial ports you had to configure for your dial up modem before you could get online?  Before "Plug and Play"?


“When we started I don't think most people, including my colleagues at Intel, realized that USB was something that was needed,” Bhatt said. “I kept on saying that if you want to make computers useable to a common user then you have to make things easier to use. I always used my own family as an example. When my wife tried to use the PC at home she as always very frustrated even with basic things like printing or scanning. She always used to say, 'What good is this? Any time I need to do something it just doesn't work.' ”

Today Bhatt is using his retirement to experiment with the Internet of Things, building his own Smart Home (another undefined term), but trying to figure out how to make everything simpler and scalable.  Like most of the people I'd consider the great engineers, Bhatt has a relentless drive to make things simpler and better.

I was going to include some details from the original article on Design News, but I'll leave that for the history buffs to look up.  Suffice it to say they knew the connectors were going to be a PITA, but had to make them single polarity, non-reversible for cost reasons.  (You've heard about the so-called USB paradox that it takes three attempts to correctly plug in the connector that can only turn two ways and only connect one way.)  Remember, when a new technology is first introduced, it has to be better than the predecessor in the market, and if the new one can't beat the older one in cost, it's probably doomed.

No, instead of the facts, I want to point out this amazing video that Intel actually aired in a 2009 advertising campaign.


Intel hired an Indian actor to play Bhatt, and I have to assume that he just couldn't do that walk for the cameras.

In real life, this doesn't happen.  No, not the beautiful groupies and adoring fans for an engineer, don't be silly.  That's not happening given an infinite number of parallel universes.  I mean in real life companies like Intel don't do this.  Except that they did this time.

And now you'll remember Ajay Bhatt as a major inventor of the USB interface.

EDIT 2335 EST:  The gremlin that inserts nonsense sentences into my posts visited again.