On the Lighter Side

As we wait with live shrimp in our mouths (baited breath) for the supreme court news ...

Mrs. Graybeard and I went to see Ant Man and the Wasp today - retiree's privilege means going at noon on a weekday.  This is the second movie in the Marvel Universe since Avengers: Infinity War back at the end of April.  The first was Deadpool 2, which I didn't see so can't comment on.

Infinity War is "heavy" movie.  Yeah, we saw it on the opening Monday, but I never commented on it.  The bad guy, Thanos, wants to kill off about half the population of the universe.  Sorta like the radical environmentalists, only not that psychotic; they want to kill off 95% to 98% of the people on Earth, not half.  At the end, you see major characters, one after the other, either being killed by Thanos or turning into a cloud of dusty flakes blowing away in the wind.  The movie starts out that way, too, with Thanos killing fangirl favorite Loki and then the entire population of Asgard that didn't abandon the planet in last fall's Thor: Ragnarok.

Ant Man and the Wasp is a lighthearted movie and just a lot of fun.  It might be as much fun as Ragnarok was, and that's saying volumes.  We also really enjoyed the first Ant Man movie a couple of years ago, and when trailers for this one started leaking out months ago we knew we'd go see it.

In that first movie, Ant Man, Scott Lang (played by Paul Rudd) is a prisoner who just got out of prison and is trying to go straight.  He's given the technology in a self-contained suit to shrink himself to ant size by an old scientist, Dr. Hank Pym (played by Michael Douglas).  In movies like this there's always a "never do this" type warning that the heroes eventually do when things get desperate; you know, like in the original Ghostbusters where it was "never cross the streams".  In this movie it was never do a double shrink and shrink between the atoms.  Once you cross into the quantum realm you'll get lost and never get out.  Ant Man crosses into the quantum realm and gets out.

This movie starts with Scott in the final days of two year's house arrest for his part in yet another movie (Captain America: Civil War) and Dr. Pym pining over having lost his wife when she went into the quantum realm years before the first movie.  Suddenly, Scott has a dream while napping at home in which he sees a scene through Dr. Pym's wife's eyes.  He contacts Dr. Pym and the race is on.  The Wasp is Dr. Pym's daughter, Hope van Dyne, played by Evangeline Lilly.  She has a suit similar to Ant Man's but with wings and wrist mounted blasters.  Pretty much the entire cast from the first movie is back with a couple of additions: notably Janet, Dr. Pym's wife, played by Michelle Pfeiffer.  A new enemy who complicates things is Ava or Ghost, played by Hannah John-Kamen,.  As a little girl, she's exposed to some sort of radiation that leaves her with the ability to "phase shift" and walk through walls, but still get solid enough in time to pound someone, and lives in constant pain from it. She wants to take over the quantum laboratory Dr. Pym builds to rescue his wife and use it to heal (fix) herself.

The movie is simply lots of fun.  I guess I find anthropomorphic ants to be inherently funny.  Yes, be prepared to leave one or two laws of physics at the entrance to the theater: when you see them reduce a 10 story building to something small enough to roll around like carry on luggage you're not to think "conservation of mass".  Try not to think about conservation of mass or momentum while watching Pez dispensers grow to 10 feet tall and knock riders off motorcycles. 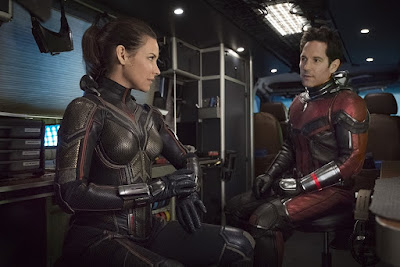 Y'all know I'm a fan of these light, comic book fantasy movies, but I give this a full five stars, right up with Thor: Ragnarok last November.