The New Threat to Your Retirement Savings

In what's probably another attempt to tax the rich, a proposal has been introduced into the Senate and will be followed in the House to tax every financial transaction.  It's targeted primarily at stock trades, but bond and derivative trades will be taxed, too.  On the Senate side, it's Sen. Brian Schatz (D - HI)  while in the House it's to be introduced Rep. Peter DeFazio (D-OR).  Sen. Schatz believes he needs to correct the market because High Frequency Trading is bad.


“Roughly half of the 8 billion daily trades now are high-frequency trades, and that is increasing volatility in the market; it is allowing a certain category of traders to essentially skim profit off the top,” Schatz told me. “And on a more basic level, it is turning the stock market into a true casino, in which you are making a bet that has very little to do with the fundamentals of a company.”

Saying “a certain category of traders” implies he thinks the market is not fair enough because everyone besides that “certain category” doesn't have access to the high speed hardware to keep up.  That assumes no one benefits except the high frequency traders, yet price theory says they help establish prices more accurately which benefits everyone.  Exactly how punishing the HF traders helps the others is unexplained.

The obvious big problem is that the Stock Market isn't the exclusive province of the very rich they always seem to want to take more from.


Some of the largest shareholders and beneficiaries of our modern financial system are pension funds for public-sector employees and private retirement account holders. Firefighters, teachers, university endowments, and private retirement savings all benefit from sophisticated equity markets. Many employers issue short-term debt to cover payroll and young start-ups sell securities to fund their growth.
...
This proposal would handicap markets for U.S. saving and investment. It would levy a tax of 0.1 percent on the value of every stock, bond, and derivative transaction in the U.S. or made by a U.S. resident.

The more subtle big problem is that it's based on ideas that have failed in other countries when these taxes have been tried.  Instead of decreasing volatility, as Schatz says in that first quote, it has increased volatility and hurt the markets.  Additionally, the digital traders Schatz demonizes really help the market set prices more accurately.  The tax would ultimately be paid by American savers through lower investment returns and fewer economic opportunities.

The plan is supposed to raise approximately $800 Billion over 10 years, and (as always) no explanation of how that number is derived is given.  This is probably assuming very little revenue in the first year and more year over year until the 10th.  It could also be total fantasy.  Most of these cost or revenue estimates over 10 years never prove true.  Part of that is the inherent difficulty of predicting the future, and part is that once the tax takes effect, traders will adapt, change their behaviors and then all of their assumptions are out the window.


A financial transaction tax is not a new idea. The Congressional Budget Office regularly includes it in its yearly list of budget options. Its report notes, however, that the tax could “have a number of negative effects on the economy stemming from its effects on asset prices, the cost of capital for firms, and the frequency of trading.”

These concerns bear out in the real world, too. Evidence from France’s experiment with a transactions tax in 2012 shows that it lowers trading volumes and reduces market liquidity, which hurts market quality.

Fewer trades mean it is harder to buy and sell stock, and markets operate less efficiently. Inefficient markets hurt everyone. They translate into fewer new jobs and less productive investment.

A a 2015 study from the European Union shows how the tax would increase the likelihood of boom-bust cycles and exacerbate overall return volatility, exactly what Schatz and other proponents say won't happen.

I've linked to two articles in this piece: Vox, the liberal rag that wants such a tax, perpetuates the lie that Trump's tax cut was "for the rich", but still admits it likely won't do the good and raise the revenue it's being sold with, and Daily Signal, a more free-market site that is completely opposed to it.  Vox's argument is "it won't be that bad, and we need more taxes".  I'm not convinced.

It seems hard to go a week without seeing another story about the financial troubles coming for retirees, whether the stories are about pension plans, social security or medicare collapsing.  We read such stories from throughout the Western world.  One of the ways that people can save for retirement in effort to minimize their personal risk is through investing with these sorts of transactions (stocks and bonds).  If you have a corporate 401k, you're probably in the markets; they're doing the buying for you and passing fees, which will include this tax, on through to you.  It seems like the wrong thing to be taxing. 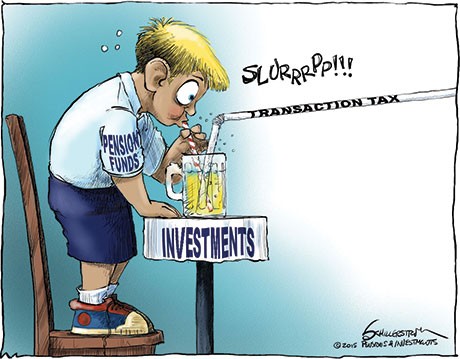