Let's Make It Three Liz Warren Pieces in a Row

First it was about her childish view of wealth, then about her wealth penalty/tax, so tonight will be about the costs of her other plan; "medicare for all".  Kudos to Guy Benson at Townhall for the story.

One of the things that has been going on in the clown car show of the Democratic primaries is how Liz Warren can tell you to the digit how many selfies she has had taken with people while campaigning, but won't tell you within the nearest trillion dollars how much her medicare program will cost.  Other candidates have questioned her about it, but all she'll say is that peoples' total expenses will go down.  Since she often says that when questioned whether taxes might go up, I have to assume taxes will be going up but her advisors say the medical premiums and out of pocket cost reductions will offset that.  That sounds to me like, "if you like your plan you can keep your plan", or "the typical family's premium will go down by $2500 a year," both famous Obama lies.

The cost of her plans has been looked at by independent groups, but the first time there was a link to the Koch brothers so it was dismissed out of hand.


...the Mercatus Center at George Mason University published a rigorous analysis performed by a former Social Security and Medicare trustee that pegged the price tag of this left-wing dream at $32.6 trillion over ten years.  (Measuring sticks: The US federal government spent $4 trillion total in 2017, and the entire US economy was a bit shy of $19 trillion in 2016).

Let's assume it adds $3.26 trillion per year, when the current total expenditures are $4 trillion (with revenues $1.0 to $1.2 trillion less than that).  As reported in The Atlantic and excerpted at Townhall.com:


The Urban Institute, a center-left think tank highly respected among Democrats, is projecting that a plan similar to what Warren and Senator Bernie Sanders are pushing would require $34 trillion in additional federal spending over its first decade in operation. That’s more than the federal government’s total cost over the coming decade for Social Security, Medicare, and Medicaid combined, according to the most recent Congressional Budget Office projections...In recent history, only during the height of World War II has the federal government tried to increase taxes, as a share of the economy, as fast as would be required to offset the cost of a single-payer plan, federal figures show. There are “no analogous peacetime tax increases,” says Leonard Burman, a public-administration professor at Syracuse University and a former top tax official in both the Bill Clinton administration and at the CBO. Raising that much more tax revenue “is plausible in the sense that it is theoretically possible,” Burman told me. “But the revolution that would come along with it would get in the way.”  [Emphasis in the original - SiG]

Since the Urban Institute is a leftish think tank, this one hasn't been ridiculed and dismissed just yet. It's just a little (4%) bigger than the Mercatus estimate dismissed for being too linked to conservatives.  Instead of attacking this report, the pro-Warren media is saying anyone who wants to know how much this plan will cost are just shills looking for Republican talking points.  Thou shalt not ask potentially embarrassing questions of Lizzie Warren.

It's hard to sum up all the economic damage Warren wants to do to America.  Ignoring the wealth tax that's likely to crash world stock markets, retirement plans and other savings vehicles, here alone she wants to outlaw private health insurance, kill off the industry and make every aspect of it government. That industry alone is about $1 Trillion/year in revenue and 621,000 people's careers.  All of those jobs will be lost.  It's conceivable that because of their experience and knowledge, some will essentially change employers, leaving their job in the private sector Friday and starting as a Government employee on Monday.  It's very likely some percentage will not do that and will join the unemployed or find other employment.

If Medicare for All is like every government health care system I've ever heard of, there will be long waits for most procedures.  Those long wait times and government rationing could also lead to an outcry in favor of supplementary plans, which would raise people's costs even further.

There's no reason to take the word of a big gubmint weenie like Princess Lieawatha.  She was, after all, part of the administration that said the typical insurance premiums would go down $2500 per year, when they went up by more than $2500. 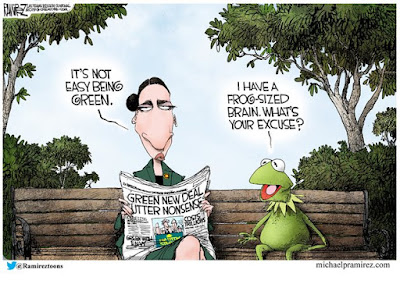 Somehow, this seemed to go here...  If I had graphic editing skills, I'd make AOC into Warren and see what else I could make out of it.

Labels: big freakin' out of control government, commies and other idiots, economics, politics