The thing we call radio isn't the product of one particular invention, but rather a culmination of many.  The early experiments were all pure science research.  The concepts of electricity and magnetism were well known, but nobody really understood what they were as the 19th century dawned.  Galvani and Volta had developed an early battery.  Michael Faraday was studying the magnetic fields around a wire.  During the early investigations in magnetism, and the electrical characteristic of inductance, it was discovered that a large coil could induce a spark in a second coil physically separated across the bench, then across larger distances.  Somehow, the magnetism had jumped a gap.  In a sense, the race was on before 1850.

In the next half century, the understanding of the physics of electricity and magnetism had expanded.  In 1886, Heinrich Hertz was experimenting with devices to create sparks in an effort to demonstrate James Clerk Maxwell's unification of electricity and magnetism into electromagnetics, and observed that the sparks could be detected in another system near the first.

It was reasonable to think that if he moved the two coils farther apart, until the second one stopped responding, that the electromagnetic field was still there but somehow too weak to cause an arc.  By that logic, if we could increase the strength of the field it would start arcing again.  If there were only a way to make weak fields stronger.  But it was 1887; the devices to amplify signals were still nearly 20 years away.

The key though, was being found at almost the same time; it was found earlier, just not understood.  Although the effect was known as the Edison effect from his noting it in 1882, thermal emission of electrons was observed before Edison, and long before humanity knew of electrons as a real particle or had a name for them.

While working to improve his light bulbs, Edison noted a darkening of the glass in his bulbs and inserted a wire into some.  When he hooked up a galvanometer to measure current, he found that current was flowing from his lamp filaments to the wire.  It wasn't long before it was noticed that the current flowed only one way, with this second wire positive compared to the filament, and he could control how much current flowed by how positive he made that wire.  This is the direct predecessor to the vacuum tube diode, which conducts electricity in only one direction.  In 1887, Edison's patent for an “Electrical Indicator” was granted, the first patent that would lead to the development of vacuum tubes.  There was a cascade of inventions, leading to the invention of the three element vacuum tube, a triode, which could be used to amplify small signals making weak signals strong enough to be useful.  The first useful triode tube is credited to Lee DeForest, patented in 1906, which he called the Audion. 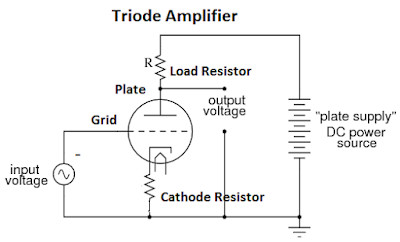 A simplified schematic of triode amplifier.

It's tempting to say that with the triode, a way of making small signals bigger, radio was going to be invented.  Except that radio had been going on for years before that, as spark gap transmitters and detectors;  Gugliemo Marconi became the first man to exchange signals across the Atlantic in 1901, five years before DeForest's triode patent.  It was Marconi's radios on the Titanic that allowed it to call for help.

In a roundabout way, this brings us to around the birth of what I'll call modern radio (ignoring the spark gap era which ended not much later).  Which brings us to birth of modern receivers.

The main problems that a radio receiver has to face are the “three S” problems.  Sensitivity: it has to be able to extract the weak radio voltages and produce usable audio output.  Selectivity: it has to be able to separate two stations from each other; to allow the user to choose which signal to listen to.  Signal handling range: it has to deliver the weak signals the listener wants to hear while not being influenced by stronger signals.  Honestly, in some applications, signal handling range isn't a problem and doesn't need much thought.  For generations, hams and shortwave listeners were indoctrinated to just think of sensitivity and selectivity; it's only the crowding of the bands, starting with the high frequency (shortwave) spectrum, that has concentrated attention on signal range. 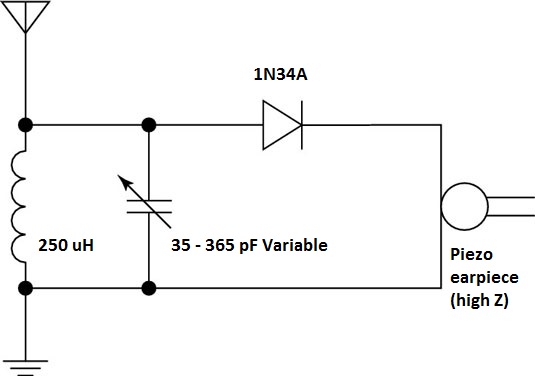 The antenna on left is a "good length" of wire, whatever you can get up, 20' or more (but don't give up if all you can do is connect it to your window frame.  The ground is either a metal ground rod sunk into the ground, a cold water pipe (real metal, not PVC).  The coil is the made by winding 66 turns of fine magnet wire (#24 to #30) on a 2" diameter plastic or paper tube.  If you use 3" OD PVC pipe, or Quaker oatmeal cardboard container, drop that to 47 turns.  Keep the turns close to each other, not space several wire diameters apart and not scrambling turns every which way over each other (but some extra spaces or some wire turns crossing each other won't mess you up much).  The variable capacitor is out of an old junk transistor radio - these have been standard for a long time.  The diode is a germanium signal diode - kind of an old part but very common.  If you have an old style transistor radio ear bud, that's what you want.  I haven't tried something like modern ear buds.

What this is from an architecture view is a tuned circuit (the coil and capacitor), followed by an AM detector.  It is powered by the received signal.

As drawn, this will tune the AM broadcast band.  Local stations can be listened to, but if your AM band is crowded, it won't be a pleasant experience.  It's modest on sensitivity, has virtually no selectivity and isn't really good for handling wide ranges of input signals.  But it's about as simple as it gets.  Four parts, some wire, no battery.