As I start writing this, I’m going back and forth between typing and working across the southern tier of the US by Sporadic E skip on 6 meters.  East Central Florida to eastern California and Arizona.  While not impossible this time of year, it’s also not to be dismissed as trivially common.

Of course, I don’t know more than a few of you well enough to know your interests in radio, but let’s resume where we were last time.

The practical question comes down to this: how do you know that the band you’ve set your radio to is going to go to the F2 layer and come back down far away?  It's common for the ionosphere to allow, for example, 21 MHz signals to propagate over a path, but not 24 MHz, and certainly not 28 or 29.  Which frequency escapes into space and which refracts back down depends how densely ionized the ionosphere is where the signal hits it.

The density of the ionization depends on how much high energy radiation is coming from the sun and that varies with the (roughly) 11 year long solar cycles.  Around World War II, a relationship between propagation and observable radio emissions from the sun was realized and the world standardized on monitoring solar radio emissions, called the Solar Flux, at a wavelength of 10.7 cm, or 2.800 GHz.  That’s just above the 2.4 GHz WiFi band.  Note to people who think being exposed to microwave or WiFi frequencies is new to humanity; 2.8 GHz radio has been coming along with sunlight for as long as we’ve been on the planet!

The 10.7cm Solar Flux Index (SFI), is one of the longest running records of solar activity but only goes back to 1946, while sunspot observations go back hundreds of years.  The measured solar flux correlates well with the sunspot number as well as a number of UltraViolet (UV) and visible solar irradiance records.

The strongest solar cycle on record occurred in the 1950s.  Cycle 19, as it’s called, is still remembered fondly as the source of 24 hour openings on 10meters and openings on 6 meters.  Observations of sunspot numbers exist back to the time of Galileo, and those cycles show that the 20th century was remarkably active.  We appear to be settling back to more typical amounts of activity.  The consensus of groups trying to predict the next cycle, 25, are saying it’s going to be much like the past cycle, which was said to be the weakest in over a hundred years.  That’s going to put a premium on operating with denser crowds of signals in the bands, receivers that handle big (nearby) signals well, and better ways to extract hard to copy signals.

(Source) Two things about this plot; first, note the highest peak, that's 19 in the late 50s/early 60s; second, note it doesn't include the cycle just completing; that one is very similar to the peak around 1910.

You might say, “that's cool but it still doesn’t answer how you can tell if your signal will be propagated to that location you want to contact.”  A simple answer is you can listen.  If you’re trying to hear a country with a large ham population, if you can hear them, chances are someone can hear you.  But what if you want to contact a country with a small population?  What if everyone is listening?

There are propagation prediction programs widely available to the amateur.  Some, like VOACAP (Voice of America Coverage Analysis Program) are the result of big government studies and expenditures.  Others are the result of different analyses and there are many websites and programs available.  As mentioned in the preface, the ARRL produces graphics like this one, which shows predicted propagation from the East Coast of the US to the areas described and a graph with a few colored lines. This plot is for last month, May, 2020 and assumes an average Solar Flux of 66 which is Quiet Sun or no solar enhancement. 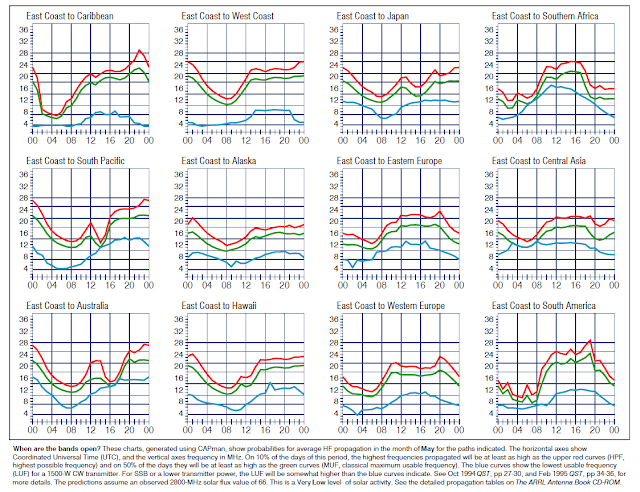 The different colors represent the frequencies expected to be open to those locations to different probability levels.  The red curve is always highest; it's the Highest Possible Frequency that will be available on 10% of the days in the month (that's 3 days out of the month; which 3?  good question).  The green curve represents the 50% of days curve or that half the time, the best frequency will be that high.  That used to be called the Maximum Usable Frequency or MUF.  Finally, the light blue curve represents the Lowest Usable Frequency for a 1500 Watt transmitter using CW (Morse code).  For lower powers or other modes, that frequency may be higher; between the shown light blue curve and the green curve.  The horizontal lines seem to represent amateur HF bands.

Should you go for the 50% chance, green curve or try for those 3 days a month that it goes to the red?  The advantage of going to the Highest Possible Frequency is that absorption in the ionosphere is lower closer to it, so a weak signal might do better.  The drawback is the other 90% of the month you sit around listening to nothing.

One of the issues of charts like these is that they don't address any of the real world effects; a guy with an 80 foot tall tower and high gain antennas experiences this differently than someone operating portable with backpack antenna and QRP power.  The good propagation programs attempt to use that sort of information to make predictions more accurate and reliable.

No matter what the propagation forecasts or predictions say, sometimes you've just got to listen.  There is no substitute for listening.  Even if you're not listening, but a piece of software is.