Tales From the Seattle Communist Enclave

Or You Just Can't Make This Shit Up.

According to PJ media, Seattle's breakaway communist enclave called CHAZ (Capital Hill Autonomous Zone) has encountered troubles with their independence.  The only assets they have are stolen, and people who steal other people's assets (that is, the people of CHAZ) will steal anything that isn't permanently attached. 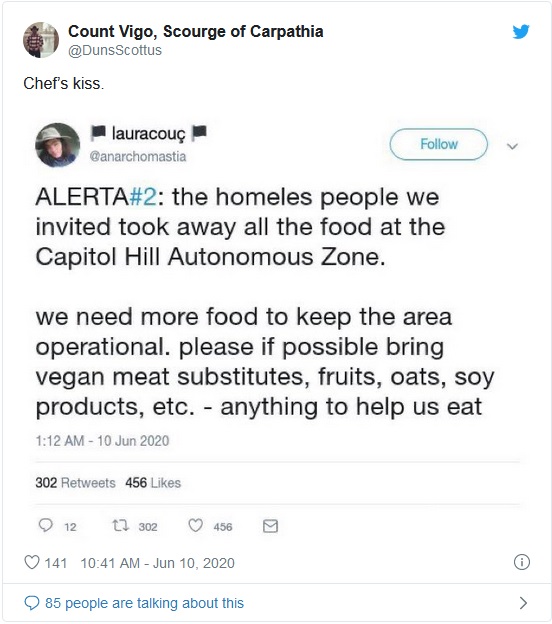 As Divemedic pointed out on Confessions of a Street Pharmacist, the communists behind CHAZ are incredible hypocrites.  One of the first things they did was build a border wall.  I assume it was with stolen materials, like the road barricades they stole from America when they formed their little empire.  And then their border wall was stolen right back. 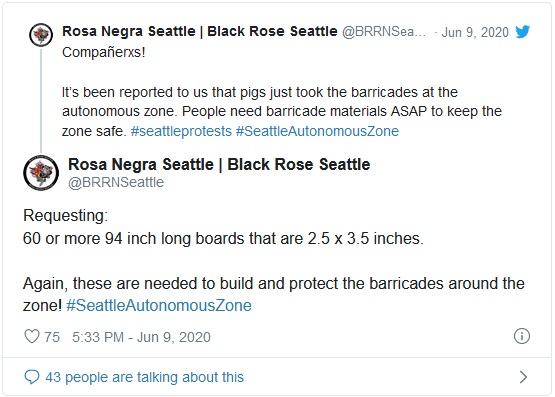 Bryan Preston, writing over at PJ Media puts the thoughts together like this:


The CHAZ collective thanked the mayor for her gift of a six-block area of America the mayor does not personally own (and which includes about 500 homes of actual Americans) by storming city hall and demanding that she resign unless she disbands the police.
...
Call the police!

Right — CHAZ wants to disband the police. The police are over in America anyway, and American police have no obligation to help secessionist CHAZ.

CHAZ has no farms or orchards. CHAZ is paved over with streets and buildings. CHAZ cannot feed itself.
...
It’s a pity CHAZ has no indigenous lumber supply.

Or electricity. Or water supply.

There has been talk about putting an embargo around the CHAZ and starving them out.  Note that they report there are 500 homes in the area they've taken over.  That's got to be somewhere between 700  and a thousand innocent people that are hostages in the CHAZ.  Since that's Antifa, and they're a designated terrorist organization I believe there are protocols for situations in which terrorists hold hostages.  We assume the citizens are opposed to losing their property to Antifa, so free the hostages and if all the Antifa loons happen to not survive, those are the breaks.