The Roman Famine of 44 BCE and an Alaskan Volcano

Those of you familiar with Roman history around the time of the assassination of Julius Caesar know that event led to a couple of decades of turmoil and civil war that marked the transition from Republic to Empire.  History records that there was also a widespread famine due to crop failures in the same period.

A research team recognized the similarity to more recent volcanic eruptions causing cold growing seasons and failed crops, and started trying to determine if there was a volcano eruption that could be linked to this famine.  They found a likely culprit half a world away in Alaska.


Around the time of Julius Caesar's death in 44 BCE, written sources describe a period of unusually cold climate, crop failures, famine, disease, and unrest in the Mediterranean Region -impacts that ultimately contributed to the downfall of the Roman Republic and Ptolemaic Kingdom of Egypt. Historians have long suspected a volcano to be the cause, but have been unable to pinpoint where or when such an eruption had occurred, or how severe it was.

In a new study published this week in Proceedings of the National Academy of Sciences (PNAS), a research team led by Joe McConnell, Ph.D. of the Desert Research Institute in Reno, Nev. uses an analysis of tephra (volcanic ash) found in Arctic ice cores to link the period of unexplained extreme climate in the Mediterranean with the caldera-forming eruption of Alaska's Okmok volcano in 43 BCE.

"To find evidence that a volcano on other side of the earth erupted and effectively contributed to the demise of the Romans and the Egyptians and the rise of the Roman Empire is fascinating," McConnell said. "It certainly shows how interconnected the world was even 2,000 years ago."

The discovery was initially made in a lab last year when McConnell and Swiss researcher Michael Sigl, Ph.D. from the Oeschger Centre for Climate Change Research at the University of Bern happened upon an unusually well preserved layer of tephra in an ice core sample and decided to investigate.  With this strong lead, the researchers looked for corroborating evidence on ice cores from Greenland and Russia, some of which were drilled in the 1990s and archived around the world.  What they found was evidence for two distinct eruptions—a powerful but short-lived, relatively localized event in early 45 BCE, and a much larger and more widespread event in early 43 BCE with volcanic fallout that lasted more than two years in all the ice core records.


The researchers then conducted a geochemical analysis of the tephra samples from the second eruption found in the ice, matching the tiny shards with those of the Okmok II eruption in Alaska—one of the largest eruptions of the past 2,500 years.

"The tephra match doesn't get any better," said tephra specialist Gill Plunkett, Ph.D. from Queen's University Belfast. "We compared the chemical fingerprint of the tephra found in the ice with tephra from volcanoes thought to have erupted about that time and it was very clear that the source of the 43 BCE fallout in the ice was the Okmok II eruption."

How bad was it?


According to their findings, the two years following the Okmok II eruption were some of the coldest in the Northern Hemisphere in the past 2,500 years, and the decade that followed was the fourth coldest. Climate models suggest that seasonally averaged temperatures may have been as much as 7oC (13oF) below normal during the summer and autumn that followed the 43 BCE eruption of Okmok, with summer precipitation of 50 to 120 percent above normal throughout Southern Europe, and autumn precipitation reaching as high as 400 percent of normal.

All from a volcano half a world away, reminiscent of the year without a summer in 1816 caused by Mt. Tambora in Indonesia; a year known as "1800 and froze to death" in Vermont and New England. 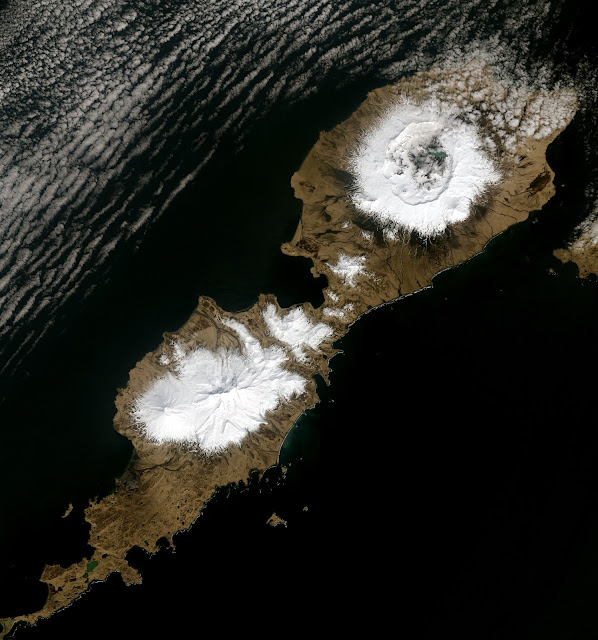 It's worth noting that the eruption and the famines led to the end of the Ptolemaic Kingdom in Egypt as well as contributing to the end of the Roman Republic and ushering in the Roman Empire.  The ruler of the Egypt was Cleopatra, so in one post we get Cleopatra, Julius Caesar and Mark Antony (related).   I also have to say that while it's published on Phys.org, which is a site for popularizing science research, that they talked about the affects to the climate.  No, a volcanic winter is no more a climate event than a nuclear winter.  It's a weather pattern.  If it doesn't last at least 30 years, and more like 50 years, it's weather not climate.