This morning at a few minutes before 9am CDT (UTC-5), SpaceX successfully fired up Starship serial number 11’s (SN11) three Raptor engines, completing the static fire test on the first try of the day and just two hours into in Monday’s eight-hour window.  Judging by the wording of the road closures, it sounds to me as though the Wednesday could be the earliest attempt at the kind of 6 mile altitude flight that the previous three prototypes made. It will also be the shortest preparation of any of them by a long shot, at 15 days.

It's worth mentioning that although the first static fire last week resulted in an abort with the vehicle computers shutting down the three Raptor engines quickly, none of them were replaced. These are the same three Raptors. We don't get to know exactly what was done, but it was either fixed in software or up under her skirt.

This NASA Spaceflight.com video shows today's test from several different angles as well as at normal and half speeds.


The big BUT here is that we don't have confirmation from SpaceX of any of this information; no confirmation the test was a complete success and no confirmation they might fly Wednesday.  The justification I'm using, (FWIW which isn't much) was the road closures were announced for the 22nd and 24th with backup dates of the 23rd and 25th.   I read that as something is planned for the 22nd and something else is planned for the 24th.  If they don't get the first one done on the 22nd, they'll close the road to try again on the 23rd.  Likewise for the 24th, if they don't get that accomplished they'll try on the 25th.

A quick check of the weather forecast for the 25th shows low winds and low cloud cover, especially in the afternoon.  TFRs have been issued for Tuesday through Friday, so we'll see.

On Saturday the 20th, a group of NASA Astronauts led by ISS veteran Christina Hammock Koch came to Boca Chica to see SN11 as it was being prepared for the static firing.  It was apparently an agency-approved trip. 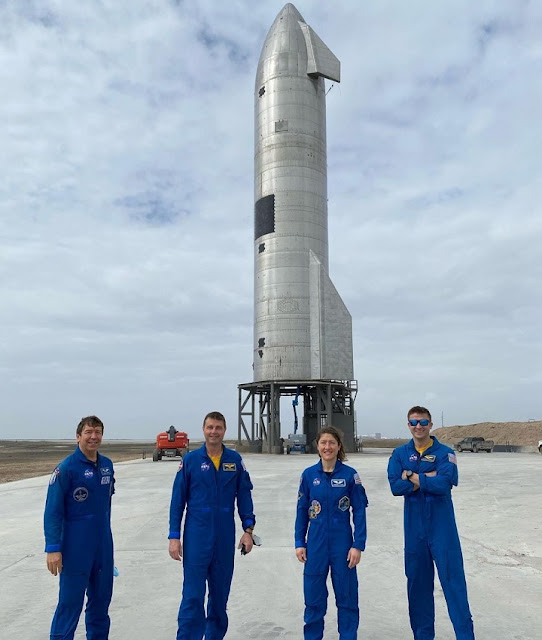 Astronaut Koch (2nd from right) and her partners who came to see SN11 up close and personal. Photo from her Instagram account.

Big things are coming next.  The next Starship prototype to fly will be SN15 but there will be a longer wait for SN15 after 11 than you're used to.  SN15 has many improvements over the design that has gotten the program to this point and no one really knows how they'll perform, yet.  Super Heavy Booster Number 1 is in some final stages of assembly before being rolled to the test stands.  BN1 has to vacate the high bay so that SN15 can use it to get her nose cone stacked.  Both BN1 and SN15 need to be tested while BN2, the first of the Super Heavy boosters that will fly, is completed.  Remember, they're aiming for a July orbital launch of a Starship on top of a Super Heavy, presumably BN3 topped by Starship SN20.   If they don't make July but launch in the fall, will you be all that disappointed?