Things Are Turning Nasty in Texas

The death of Liberian Ebola victim and border crasher Thomas Duncan isn't the nasty turn - that was pretty much expected with a disease that has death rates as high as Ebola does - the nasty turn is that Sheriff's Deputy Michael Monnig is being hospitalized with symptoms consistent with Ebola.

As soon as I heard the story of how Duncan was treated in the ER - being sent home and going back days later when he was bleeding out - I started doing the multiplication in my head.  Everyone in the ER when he was admitted is at risk.  Everyone in the ambulance that carried him to the hospital.  Everyone who rode in that ambulance with that crew or any other crew is at risk.  Add to those all the people who went through the ER or the public areas of his apartment building until (if?) they fumigated with chlorine.  Those family members under armed quarantine?  Chances are they're dead already, they just don't know it.  Deputy Monnig was there for a short time.  The family was in close contact for days, before being evacuated to the luxury place they're staying.  From there, the chances are harder to figure.  What about people who were in contact with people who were in the ambulance?  It's hard to know

It appears that this virus is transmitting faster and easier than the authorities are saying it will/should/ordinarily does.  No one quite knows how they get a virus, after all, but the spread in Spain is perplexing the experts.   Deputy Monnig's son said, “He was in the apartment for 30 minutes, which we were told is no chance to contact the virus”.  Reports out of Spain are saying people who were around the first nurse, Teresa Romero Ramos, are now showing symptoms.

In response to my light hearted cartoon post Monday, an anonymous commenter left this (minor edits, so errors are mine):


Here is the imminent threat: Ebola or some other disease will spread. It will get to Mexico and the rest of Central America. Their health care is inadequate for the challenge and the disease will be certain death if you catch it. They will choose the only logical choice and head North where health care is exceptional and "free". As such they will be considered "refugees" and our laws are so mucked up that we will be forced to allow them in. Our once outstanding and capable healthcare system will be over run and become ineffective. Millions may die. [make that will die - SiG]

A few months ago this would seem unlikely. Today it is more likely then not. Consider how our government choose to respond to Ebola and people coming here from West Africa. The system doesn't work. They will only take the correct steps to save Americans AFTER a lot of Americans die and after the disease is established here. They tell you "we got this".  Our health care system is second to none.  But think about it.  How many health care workers does it take to manage one Ebola patient 24 hours a day 7 days a week? That number is 108. How many total beds in the entire U.S. are their for level 4 quarantine patients? less then 30. It will take less then 30 Ebola patients to overwhelm our system. After that you will be sent home and your friends and family must care for you. Then everyone who touches you or anything contaminated by you becomes sick. The progression is exponential. Does it sound unbelievable to you? Fair enough that is the nature of human nature. On Sept 10 2001 flying passenger jets into the WTC sounded unbelievable too. Sadly by the time you and the CDC and the president "believe" it then it will be too late and we will be subject to the reality of a fast spreading disease. Will it happen this time with Ebola? I don't know but it could and if we get lucky and it doesn't, what next?

Ebola burns out quickly.  If you're exposed to it, you're either dead within 30 days or you're recovering from the fight of your life.  Because of that, quarantine is possible.  It's a shame our CDC is doing exactly what Anonymous said, and is just telling us "we got this".   But in a nearly 100% incompetent administration, what would you expect? 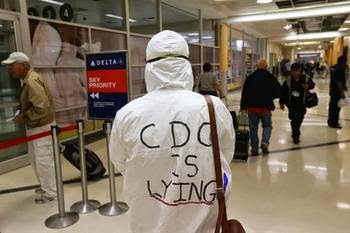